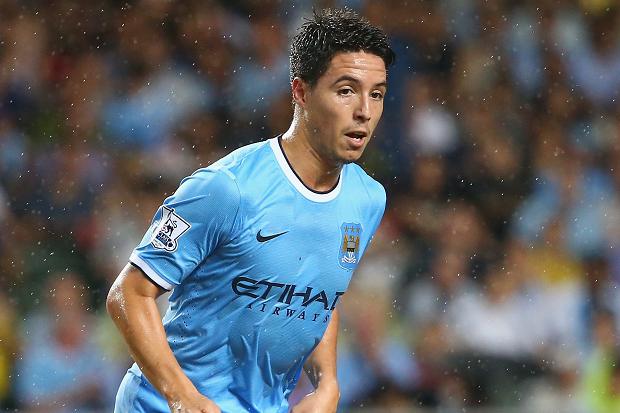 He must have been fearing the worst when new manager Manuel Pellegrini signed highly-rated right-winger Jesus Navas this summer.

Nasri, 26, started on the bench for the Premier League side’s opening game against Newcastle – which they went on to win 4-0.

Prior to the kickoff, BBC 5 Live commentators had revealed that Nasri was unhappy at being left on the bench. However, he did feature in the game, and grabbed himself a goal. But from the league debut performance of his successor Jesus Navas, it’s clear the French international will struggle to oust the Spaniard from the side this season.

Manchester City also have Scott Sinclair and James Milner who can both play on the right-hand side of midfield, so manager Manuel Pellegrini faces a task to keep them all happy.

The side boast excellent personnel in most every position this season, and having top players fighting for their place is a situation most can only dream about. However, there is the risk a player can become discontent with the lack of playing time, and Pellegrini will be wary of such a thing happening to Nasri.

Last season, the 26-year old made 28 Premier League appearances – scoring two goals, and making seven assists. By his standards, Nasri wasn’t anywhere near to the level many have seen him playing at in the English top-flight. His form has been shaky ever since leaving Arsenal for the Premier League runners-up in 2011.

But being a World Cup season, big things are expected of the playmaker this campaign. He will be desperate to keep himself in contention of making the final international squad for next summer, but Navas currently stands in his way of proving his worth to the side.

Can the Frenchman get enough games for City this season?