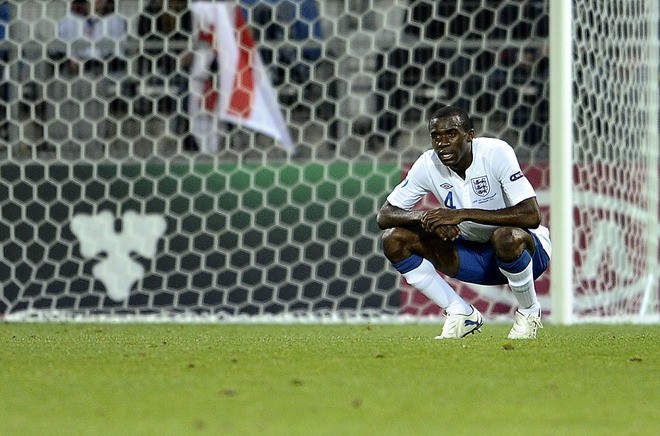 Before the European Championships, Stuart Pearce was given the assignment to prepare England’s under 21′s for what life would be like as part of the full national side. By crashing out at the group stage in a blaze of glorious failure, Pearce has managed to pass the test in flying colours. In fact Pearce prepared the youngsters so well for their future national careers he has been rewarded with a new 2 year contract.

It’s hard not to feel sorry for the young prospects as they saw victory snatched from their hands via a cruel deflection. Then again they got what was coming to them and what they truly deserved…an early flight home.

Throughout the tournament Pearce’s side played some terrible football. The fact they attempted 61 ultimately unsuccessful long balls (more than any other team) is the proof in the pudding. Even the players seem to recognize their ineptitude.“Obviously, they play a different type of football to us; they’re really good at keeping the ball.” Michael Mancienne.

Sorry Michael but that’s the sort of football every team should be looking to play. The blame can’t be placed solely on the shoulders of the players who took the field in Denmark. Their performances and style of play epitomised everything that is wrong with football in Britain.

Just go down to your local football pitch to witness what I’m talking about. On a Saturday afternoon you can watch the boys all chase the ball, not pass the ball, around for 90 minutes. No 4-3-3, 3-5-2 or 4-6-0 formations on display. Not even the traditional 4-4-2. What you witness is 0-10-0 against 0-10-0, the ultimate fluid formation where all 20 players somehow manage to stay within five yards of the ball. Like a pack of wilder beast, charging bewilderingly around the pitch. ‘What’s the score?’ “Who cares” says the Father standing by the side “GET YOUR FOOT IN!” “CLEAR THE C**T” “GET IT IN THE MIXER”.  As terrible a mentality as this seems, it is all too common. Yet somehow out of this mess we manage to produce some excellent footballers.

Ultimately the biggest failing of England has been the management’s inability to make the most of their players’ talents. Hoddle, Le Tissier, Gascoigne, Scholes and even Rooney are all superb footballers whose true ability has been curtailed by a failure to recognise how to utilise them to their true potential.

Instead of consistently looking abroad for the answers as to how to play the beautiful game England need to start looking closer to home. There is no rule as to what constitutes a successful style of play. It’s about finding a system and approach that suits the players at your disposal. The occasional long ball aimed towards Andy Carroll will do England no harm at all. Neither will launching the ball into the channel for Sturridge and Walcott to chase in the future.

Throughout the European Championships the central defensive pairing of Chris Smalling and Phil Jones often looked like the most creative players in white when driving forward with the ball at their feet. Both have potential to become hugely influential to the future success of England. Although it must be said they had minimal competition in the creativity stakes as Fabrice Muamba’s lumber some approach and Jordan Henderson’s laughable attempt at justifying his £20million price tag left a lot to be desired.

It quickly became apparent that although Pearce had the tools to play a more stylish brand by playing to the strengths of the likes of Rodwell and Sinclair, he was sticking with the stereotype. A number of hopeful long balls in the opening game were easily dealt with in a frustrating opening period against Spain, and that was just when the Young Lions had the ball. By half time, Spain boasted a dominating 78% of possession.

Having the majority of possession is not the be all and end all of football though. It’s about what you do when you have the ball. And when England did get the ball they were shocking. A lack of movement off the ball meant the Young Lions resorted to long ball football. This was particularly ineffective as the likes of Sturridge and Welbeck prefer the ball to feet. If England are going to utilise such a tactic effectively,  it is imperative the side is structured towards such a style by drilling the players until it becomes second nature.

Furthermore, players have to be allowed to make mistakes and get caught sometimes without being harangued to the extent they won’t even try anything like that again. Right now there is a Row Z mentality – launch the ball as far away as possible to minimise risk. English players have the ability to play good football (e.g. http://www.youtube.com/watch?v=2Y29IfzPJ1E). They just have to express themselves. This will not happen though due to the intense British media and pressure on the players ensuring the same panic-stricken safety first and ultimately unsuccessful approach will continue for years to come.