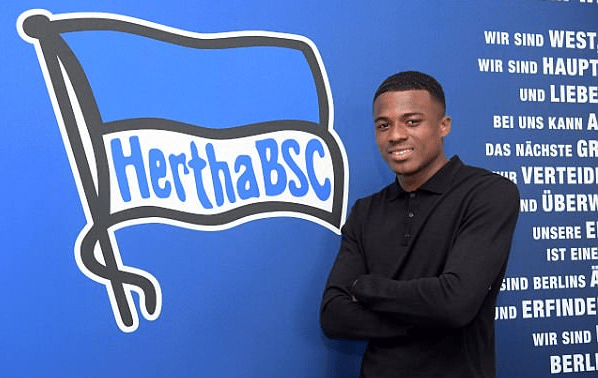 There was a melancholic reaction from supporters after Manchester City attacker Javairô Dilrosun joined Hertha Berlin. The 19-year-old has signed a four-year deal with the Bundesliga side after struggling for playing time in the first-team.

Despite never making an appearance for the seniors, fans paid tribute to his efforts in the youth setup and have wished him well for the future.

Really good footballer @Javairojoreno. Dilrosun could do very well at Hertha. Was always gonna be very difficult for him to get any games here, but don't be surprised if he's one of those that blows up very quickly once he settles there. Might not of course, but has the talent.

Good luck Javairo with the rest of your career. Just remember ‘once a Blue always a blue’

Hope he does well.

Dilrosun joined City from Ajax in 2014 and has gone on to make more than 30 appearances for the u18s, u19s and u23s, but couldn’t dethrone the likes of Leroy Sane, Bernardo Silva, Raheem Sterling or Gabriel Jesus to get a game.

The Netherlands u20 international joins a Hertha side currently sitting 10th in the Bundesliga after 32 games, just four points adrift of the Europa League places with two games remaining of the season.

City boss Pep Guardiola has built a very young squad this season and has given game time to 17-year-old forward Phil Foden, 18-year-old midfielder Brahim Diaz and 19-year-old forward Lukas Nmecha, but Dilrosun was low down in the pecking order.

Hertha are excited to have landed his signature and will look to develop him from a promising youth player into an indispensable member of the first-team.