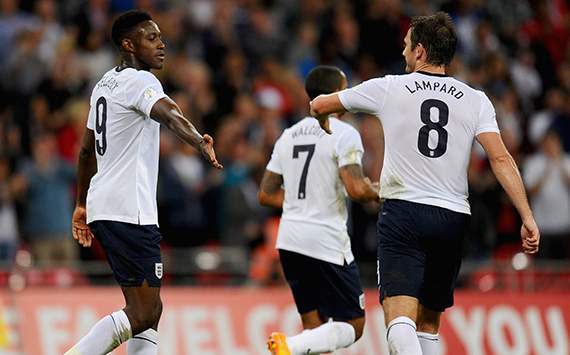 If ever there was a routine win for England, then this was it. From the first kick, to the final whistle, the Three Lions remained professional and, vitally, got the job done. Credit to Moldova though, they were a much improved side to the one that was hammered by England in Chisinau a year ago.

If Roy Hodgson’s men were to steer clear of frustration, then an early goal was necessary. So when Steven Gerrard drove the ball in from the edge of the box after just 12 minutes, they were well on their way.

England’s defence has been a talking point in recent weeks, but it is difficult to judge their international credibility based on a game against minnows such as Moldova. The game was over as a contest after just 27 minutes when Rickie Lambert nodded home from Stanislav Namasco’s parry. “Rickie Lambert, England’s goal machine” sang some sections of the wembley crowd.

The game was becoming the equivalent of a training session for England by this point, the passing was simple and patient as Moldova carried out a damage limitation task. Just before half-time, Danny Welback made it three.

Maybe England could have been further ahead by this point. They hadn’t created that many chances though, but Kyle Walker was doing his best impression of a defender who couldn’t cross a ball, which is unlike him. He wasn’t himself going forward, despite being good enough defensively.

England’s fourth and Welbeck’s second came six minutes after the break. Easy peasy. Welbeck was on a hat-trick and he came close with a near post header and blasted wide from a Gerrard lay-off. Instead of the match ball though, he received a booking for kicking the ball away in the first half, meaning he will miss Tuesday’s trip to Ukraine. That caution overshadowed what was a decent, if not easy, win for England. Hodgson will be sweating on the fitness of Daniel Sturridge. If the Liverpool man doesn’t come through, then Jermaine Defoe may partner Lambert up front.

England will take massive positives from of the performance of Ross Barkley. When he was introduced, he looked lively and was threatening, not out of place at all. Let’s see where the future takes him.

Overall, a convincing win for Hodgson’s men, but they have three real tests coming up now, starting in Kiev on Tuesday before taking on Montenegro and Poland at Wembley in October.