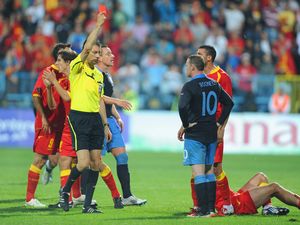 Last night Wayne Rooney’s astonishing moment of stupidity ensures that Manchester United star is set to miss the start of Euro 2012 next year. It remains to be seen whether he is handed more than a single match ban by UEFA for his act of madness. Wayne’s attack at at Dzudovic’s shin seemed as worst as Arshavin’s kick against Andorra that got him banned for the first two games of Euro 2008. Although England earned the one point needed to qualify for the championships, still they were in a winning position when Rooney got sent off and the manager just could not defend his player’s act.

“It’s a red card. You can’t defend that. I’m not happy, absolutely,”

“I spoke with him. He made a silly mistake and he said: ‘Yes, sorry”

Well sorry is not good enough for England. Rooney only had one major international competition where he excelled, 7 years back in Euro 2004. Other than that he only had horrendous outings. Sent off against Portugal in WC 2006 being highly annoyed playing as a lone striker, the team could not qualify for Euro 2008 and he was one of the flops of the tournament at last year’s World Cup. The criticism is fair enough. It will be a crime to say that Peter Crouch is better player than Rooney but their stats for England tell another story. The former Everton player has never been able to emulate his fantastic club form for national side, mind you, in major competitions not in friendlies and certain qualifiers.

If you ask Manchester United fans, they say that Rooney was rushed back into the side both in 2006 and 2010 World Cup. In 2006 he came back from a metatarsal injury and was never fully fit to have much impact and again in 2010 he got a knock for which he did not take part in last few games of the season but started the first game for England. So if Rooney doesn’t get the injury excuse this time around, he made sure that his disorderly start to major tournaments for England continues as his frustration cost him and his nation last night.

The Montenegro manager, Branko Brnovic claimed that he was surprised to see the England international take part in the game.

“I read in the newspapers that Rooney has some family problems in England. To be honest I didn’t expect him to play because those things are serious and it’s not easy to concentrate on the game,”

“They’re serious and maybe that’s why he did what he did.”

On the other hand Fabio Capello disagreed with these comments and claimed that Rooney was annoyed as he missed certain passes and could not control the ball well during the match so for this reason he took out his frustration and kicked the opponent. Having said that Capello added that he cannot get into Rooney’s head to know what is going on and why he reacted in such a way.

Whatever the reason might be for his reaction, the bottom line is that he will miss the start of Euro 2012 campaign. His suspension might just be blessing in disguise for England as he has not been able to help the nation much when it comes to the big stage. So perhaps the three lions can form a system that is effective without him. But I guess that will not happen as for England star names play and not the ones who are best for the system. Having said that Rooney is without a doubt an exceptional talent but whether his shaky start will affect his national side yet again, Only time will tell.