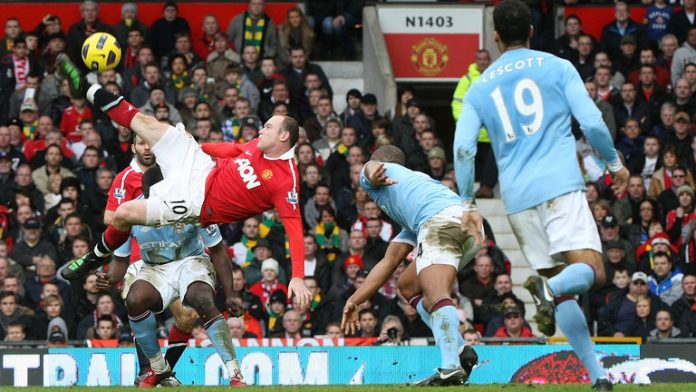 Wayne Rooney hit back at his critics who thought he was past his best after scoring the 200th Premier League goal of his career on Monday.

The 31-year-old bagged the opener in Everton’s 1-1 draw at Manchester City, to join former England star Alan Shearer as the only man to score 200 goals in the competition.

Rooney has been in fine form since returning to his boyhood club and he was eager to make his point to Sky Sports after the game.

“It is not bad for someone who is not fit anymore and can’t get about the pitch,” he said.

“I have always put a shift in for the team and tonight is no different.”

Nine of Rooney’s 200 goals have come against City, although Newcastle United have been his favourite opponent with 14 strikes against the Magpies during his career.

Rooney’s 50th and 150th goals also came against City, with his 100th goal coming against Arsenal for Manchester United back in January 2010.

His most prolific season was 2011/12, when he scored 27 Premier League goals for Manchester United, while his best goal was undoubtedly his overhead kick against City in 2011.

It could be some time before another player joins Rooney and Shearer in the 200 club.

Bournemouth striker Jermain Defoe is closest to the landmark on 158 Premier League goals, but he is now 34-years-old and scoring another 42 looks a tall order.

Sergio Aguero has scored 123 goals in the Premier League in 183 appearances for City, but he has made it clear he wants to finish his career back in Argentina so is also likely to fall short.

Kane has already scored 78 in the Premier League, while Lukaku has bagged 88. Both players are just 24-years-old and seem well-placed to close in on the magical 200 mark.