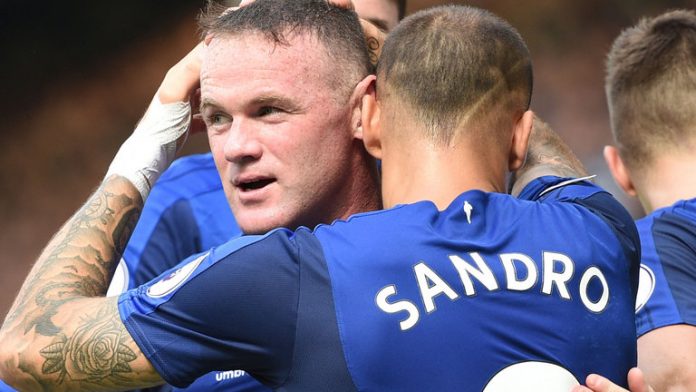 Having got off to their best start to a season since the 1978/79 campaign it’s fair to say the wheels have fell off at Everton over the past couple weeks.

Defeats against Chelsea and Tottenham have raised doubts over their prospects of challenging for a top four spot and led to questions being asked over Ronald Koeman’s transfer business this summer.

The Dutchman spent in the region of £150 million during the transfer window, but his failure to replace Romelu Lukaku has left the Toffees’ squad looking short of striking options.

Everton are in Italy on Thursday to face Atalanta in the Europa League, before returning to Premier League action on Sunday with a trip to Manchester United.

It’s an important week for the club and one where ex-United striker Wayne Rooney can highlight his importance to their prospects of success this season.

Rooney didn’t endear himself to Koeman during the international break after being arrested for drink-driving, but the Everton boss would do well to put that aside and focus on how the former England star can help him out of a hole.

The 31-year-old has been utilised in a deeper-lying role over recent seasons, but with 200 goals in 464 Premier League appearances to his name Rooney is surely worth pushing further forward – even if it’s only until the January transfer window?

Koeman has plenty of creative players in his squad including Gylfi Sigurdsson, Davy Klaassen and Nikola Vlasic, but with Sandro Ramirez yet to show he can cut it in the Premier League Rooney is Koeman’s best hope for goals.

Rooney was at his peak during the 2011/12 season, scoring a career-best 27 Premier League goals, and his output since then hasn’t been helped by playing a largely supporting role.

He is certainly not as quick as he once was, but Rooney’s eye for goal is still there. He has scored both Everton’s goals in the Premier League this season and would undoubtedly add to that tally if he was pushed further forward.

Everton were woeful last weekend, with Tottenham’s defence enjoying an untroubled afternoon, but a fired-up Rooney playing as a central striker wouldn’t allow teams to have an easy time.

Koeman slipped up by failing to address the considerable gap left by Lukaku’s absence, and neither Sandro or England youngster Dominic Calvert-Lewin have shown they are up to the job at the moment.

The Everton boss said he was “very disappointed” with Rooney’s recent behaviour, but he needs to shelve his disappointment and utilise him as an out-and-out striker.

Without Rooney’s goals, Koeman could find himself under considerable pressure at Goodison Park over the coming weeks.