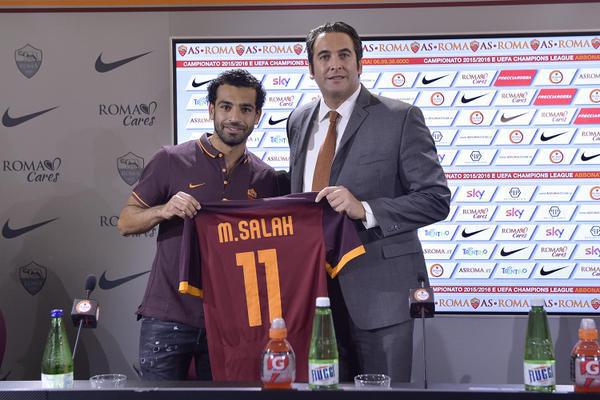 Italian giants Roma have confirmed (reported by Daily Mail) that they have signed Mohamed Salah and Edin Dzeko from Chelsea and Manchester City respectively on permanent basis after activating clauses in the loan agreements of both players.

Salah spent the last season on loan at Fiorentina but the Egyptian ended up at Roma this summer transfer window despite his impressive outings for the Viola. Rudi Garcia’s side also acquired the services of Dzeko and Iago Falque from Genoa. The report from Daily Mail states that Roma, as a publicly traded company, were required to publish that had made the moves permanent of the three players.

Among the most significant transactions of the summer transfer campaign of the sporting season 2014/2015, conducted from July 1 to August 31, 2015 were:

“The acquisition on permanent basis of the rights of players Dzeko of Manchester City, Salah of Chelsea and Falque of Genoa. For these players there were initially signed agreements to be acquired on temporary basis, became permanent following the verification, during the first months, of the contractual conditions previously set.”

Roma’s full statement in Italian can also be read here.

It is believed that Salah and Dzeko had appearances related activation clause in their contracts. The winger and the striker have featured in 8 and 7 games repectively, which might have triggered the clauses in their deals.

The report also states that Salah’s buy-out figure was £16m which provides Chelsea a £5m profit on the player they bought from Swiss side FC Basel in January 2014. Salah failed to muster up a starting eleven spot at Stamford Bridge and was always on the lookout for more game time elsewhere.

Dzeko, though will cost Roma around £8m. The Bosnian was an integral part of the Manchester City side who won two Premier League titles recently, scoring 72 goals in 189 appearances.