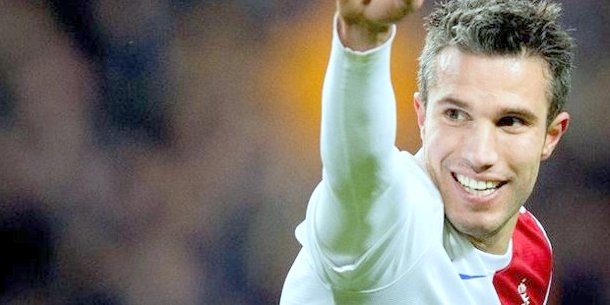 Manchester United camp will be more than pleased to see their star striker Robin van Persie returning back to form after netting three goals in two back to back matches for his Netherlands.

But, none would give more pleasure than hearing the news from the player himself about his future and commitment to the club.

The 29-year-old who joined the Red Devils last summer from Arsenal for a reported fee of £24 million has expressed his desire to stay at Manchester United (his third club) till the end of his career.

Speaking to Voetbal International, the Dutch international was quoted in the Daily Mirror:

“The coming years it’s Manchester United. And maybe longer. United would be my last club.

“I have every day at United a new challenge. My development is an ongoing process.

“That gets an extra boost when you are surrounded by new coaches and teammates, all with their own ideas, in a totally new environment.”

The Dutchman notes that several top clubs across the Europe like AC Milan and Juventus give value and importance to the older players and similar sort of culture is practiced here at the Old Trafford club. He added:

“You used to have that at Juventus and AC Milan, Manchester United today is a good example. So who knows how long I stay at the club.”

Robin van Persie took no time to settle into his new club and fired all cylinders instantly. Sir Alex Ferguson praised his heroics and impact as Cantona-esque and is one of the contenders for the PFA player of the Year award.

He scored 23 goals in 38 games for the Premier League leaders but was going through a bad patch recently, having scored just one goal in 10 matches for the club.

It didn’t take much longer for him to get back his Midas touch as he found his goal scoring form again with his national team surpassing legendary Johan Cruyff in the process with 34 goals.