Venkat: Liverpool and Chelsea have had some incredibly memorable clashes in the decade. This is a fixture that never disappoints as far as drama is concerned. What do you expect from the game on Saturday?

Sai: I expect a highly entertaining game with quite a few goals. Personally i don’t want to be on the receiving end, but considering how expansive Chelsea have been this season, i can see Liverpool scoring one or two as well.

Venkat: You guys love to taunt Chelsea with regards to the money we spend, and how we would be nothing without Roman’s millions. Brendan Rodgers spent well over £100 million this summer. Hasn’t gone so well for you so far, has it?

Sai: To be very honest, Chelsea have spent the money extremely well, due to several factors such as lure of continued European football and high profile managers. Liverpool on the other hand, despite having the ambition, do not have the proper foundations and personnel required to execute their plans. Also it is safe to say that Brendan has been quite disappointing in the window since he joined Liverpool.

Venkat: I know hate is a strong word, but it does aptly describes how Liverpool fans feel towards Jose Mourinho. But even the most ardent of Reds can’t argue that the tactical astuteness that the Portuguese possesses is exactly what was lacking in your title run-in last season. If he were to be made available for the job, would you, in your mind rather than your heart, be happy to see him at the helm at Anfield?

Sai: Hopefully last season will be a learning curve for Brendan. We needed a draw at Anfield to stay on top of the title race and we went for a thrashing, which ended up costing us the game and in turn the title race. Although there was considerable luck involved in the 2-0 defeat, Mourinho clearly outsmarted Brendan tactically with a second string side.

Personally i have huge respect for Jose Mourinho and if he was available, there would be no second thoughts as far as i am concerned.

Venkat: Back to serious business now. What do you have to say about Mario Balotelli’s Liverpool career so far? Do you think he should start against us?

Sai: I think the media and fans have been a bit harsh on the enigmatic Italian. He was never an out and out number nine. Mario’s best performances come when he has a shadow striker alongside him. He was pretty good against Spurs, with Sturridge beside him and since then his performances have dipped considerably playing as the lone striker.

However, he has shown glimpses of his ability playing alongside Fabio Borini recently and I fully expect/want him to start tomorrow. A player with his ability can always make a difference.

Venkat: How do you think Liverpool should set-up to stop the Chelsea juggernaut on Saturday? We’re unbeaten and have closed to unstoppable thus far. Do you think you have a chance of causing an upset?

Sai: Personally i feel we should continue with the structured and well drilled defensive setup we used against Real Madrid. I am aware of Chelsea’s fantastic form this season, but if we can find a bit of creativity in the final third in the form of Sterling and Coutinho, i can see us taking a point from the game, at the very least.

Ting.Ting.Ting – Round 2 – Venkat’s turn now to face the music

Sai: From a tactical standpoint, do you think Liverpool will play a rigid defensive setup like they did against Madrid? If so, will they benefit from it?

Venkat: No. Personally, I don’t think Brendan Rodgers can set up defensively for this game. He came under a lot of pressure for fielding a second-string squad in midweek at the Bernabeu, and his decision to do that will be vindicated only if Liverpool can put in a strong, attacking display against Chelsea. It’s a home game, and the Anfield crowd will not at all be happy to see negative tactics from their side. Liverpool at home have always been attack-minded, no matter who the opposition. Against Madrid, it was all about damage control, to make sure that you weren’t embarrassed. Even before the game had started, Rodgers had conceded defeat. On Saturday, it will be a proper battle, and both sides will set up to win.

Sai: United showed that stopping Fabregas can dictate the tempo of the game. Do you see Liverpool managing to do that?

Venkat: I certainly see Liverpool trying to do it. Whether they manage it, of course, remains to be seen. If Fabregas is allowed to dictate midfield, then Chelsea will win. Marouane Fellaini did a fantastic job by stifling the Spaniard at Old Trafford two weeks ago. I’m not sure Liverpool have a player to do an equally good job. My bet would be on Jordan Henderson being assigned the duty. The Englishman will need to have a really good game, as Liverpool simply have to make sure that they do not get overrun in midfield.

Sai: I can see a touchline scrap between Jose and Mario, who do you see coming out of it in one piece?

Venkat: I personally don’t see it happening. Balotelli has been extremely poor on the pitch so far and needs to concentrate on his game. Any sort of touchline squabble, especially with Mourinho, is the last thing he needs. And if any altercation does happen, I think the following photograph says it all: 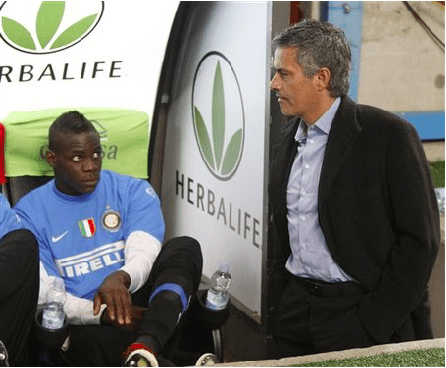 Sai: Sterling picks up the ball in your final third and scores after a Terry slip. What are the chances?

Venkat: Ah, that would be quite something for you Liverpool fans, wouldn’t it? JT has been a rock this season, and even at 33, is proving that he still has a few good years in him. Even though he has had his share of slips in the past (including one at Anfield), judging by recent events, I think it’s more likely that we’ll see another Stevie G slip than one from Terry. Sterling has been very poor as well in the last few weeks, and he may well need a lucky break like that to get back on the scoresheet and rekindle his form. But no, I certainly don’t see JT giving him a freebie.