The thought going into yesterdays game at Craven Cottage – a place we haven’t had a League win for three seasons – was that avoiding a repeat of last season’s debacle (0-3, Scholes had a shitter etc) would have been ideal.

But that naïve view would have altered immediately after a glance at the top of the table that read ‘6 points’ and ‘For: 12, Against: 0’ next to Chelsea’s name. A win, against our most prominent and contemporary bogie team, was essential.

Well Sholes, the current darling of the Premiership, didn’t have a shitter and continued in his rejuvenated way by scoring a ‘early-Noughties Scholes’ beauty. But as it was, and how it so avoidably shouldn’t have been, the curse of the cottage (copyright ‘When the Seagulls Follow the Trawler…’ 2010) struck again. And more pressingly, the ‘curse’ of last season’s consistently average brand of football has, at such an early stage, struck again.

The immediate and all too obvious post-match criticisms lead to one incident and one player being a tit. Nani’s penalty was awful and eerily reminiscent of last seasons second game of the season away to Burnley and Carrick’s. So in terms of impact, there is no doubting it was crucial.

But that’s just too easy. Why hide behind that, as if to suggest that was the reason we failed to hang on to the win? A 3-1 would have completely covered over the cracks in our tactics and complete lack of ambition coming forward, however at least the penalty miss and failure to hold on for three points exposed our poor display for what it really was.

As Ferguson has already said, to drop ‘sloppy’ points like that is detrimental. Not because we can’t make up the points (because of course we will), but because we are in a league where Chelsea are apparently already running away with it, and even the likes of fucking City have a first and second XI good enough to win any league.

The concern, I’m afraid, goes beyond dropping 2 points. It should focus more around the lack of depth, and generally speaking the lack of genuine class in our squad.

Two seasons ago we were starting with Berbatov and Rooney (as we are now, even though Rooney was out yesterday), yet rather than simply relying on the two strikers as most sides do (and as our recent 4-4-2 restricted tactics suggest we are increasingly starting to do) our attack was solidly bolstered by the depth of our squad. Playing behind them was a certain former best player in the world – who hit 42 goals the season before – and on the bench a ruthless, determined Argentinean waiting for his chance to come on and change the game. Yesterday, we had Giggs and Owen (both of whom did nothing) coming on to grab us the win; and although we went 2-1 up 10 minutes after they came on, it could be argued that the lack of concentration and defensive organisation – triggered when Park left the field and having no non-defender tae over – allowed Fulham to push on until they got their deserved equaliser.

If there is one thing that even the laziest of football fans has learnt about Ferguson’s Untied, is that to right us off, at any stage of the season, is stupid. Especially after one solitary poor result. But trying to remain positive and rational is hard when other deeper factors override the superficial elements of the result.

A 2-2 draw at Craven Cottage, the first time we haven’t lost their in three seasons, is ordinarily an Ok result. But if we are to improve on last season – where there is a lot of room for improvement – we surely have to reserve those ‘Ok results’ and ‘narrow draws’ when playing our rivals (the way Liverpool/Arsenal and Tottenham/City have done already), who you’d expect will always provide a sterner test than Fulham.

Chelsea have set the pace, Arsenal have shown they get goals too (without Van Persie and Fabregas, who only played a bit part against Blackpool). Tottenham have started well and City, you fear, will also start to gel. So where does that leave us? Apart from the 3 new faces (who you feel may all struggle to get regular football in their first season), we are lining up and playing in almost the same way as last season…which I fear may not exactly be a good thing.

Like me, most United fans are waiting for something special – always a possibility with United. An explosion of goals from Rooney? Chicharito to light up the Premiership? Whether either of those happen is not in any doubt. The real question however is when? Because for now, if yesterdays game is anything to go by, we need them to step up right now before Chelsea and their love of goalscoring run away with it before Christmas. 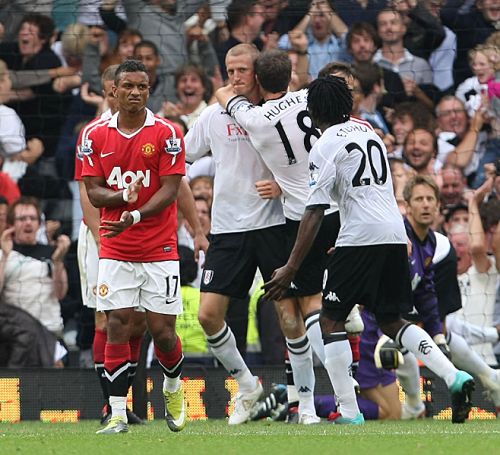