James Ducker of The Times, who mainly covers the Manchester based clubs for the paper, reported a sensational story yesterday regarding Manchester United transfer, where he wrote the Champions are plotting a January move for Borussia Dortmund forward Marco Reus and could involve Man Utd midfielder and former Dortmund player Shinji Kagawa as a part of the deal to sweeten the move.

Manchester United’s summer transfers didn’t go according to the plans of David Moyes and the Scot is ready to make amends in the January transfer window. According to the report, goal scoring from the midfield has been one of the key areas Manchester United have really struggled this season, and therefore the Red Devils have identified Reus as a possible solution to the problem. 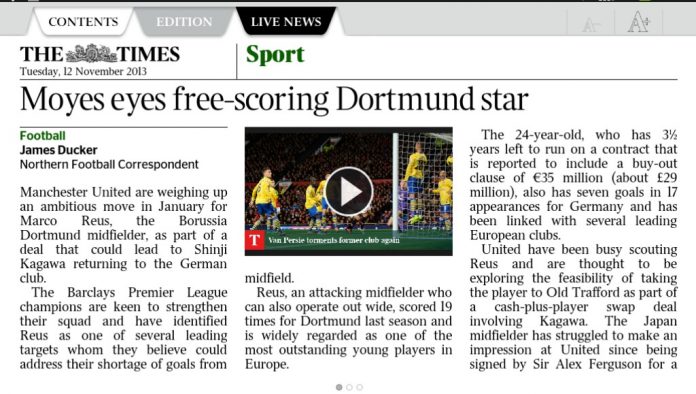 The 24-year-old Reus has established himself as one of the stars of Germany in the last couple of years. He has scored 19 times for the club last season and has already bagged eight this campaign thus far. Kagawa, on the other hand, joined Man Utd for reported fee of £17.6m last summer, has had a frustrating time with the club and under the new manager David Moyes, he has been given a peripheral role. The diminutive Japanese has voiced his frustration already for not getting enough game time while Dortmund manager Jurgen Klopp admitted over the summer that he had enquired whether Kagawa would be eager to return to the Westfalenstadion.

However, the problem lies with the contract situation mentioned in the article. Reus has a contract till 2017, has release clause of €35m/£29m but that cannot be activated until 2015, while according to reports from Bild, Dortmund are trying to increase his salary to  €4.5m/year to €6m/year. 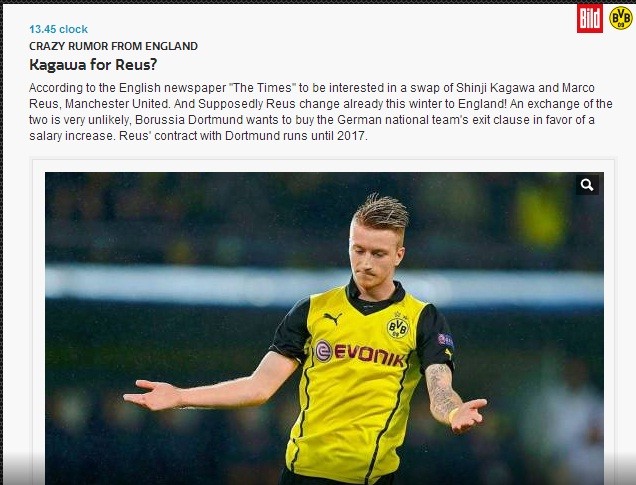 The Bild has reported the story quoting The Times as source and labels it as a “crazy rumour”. They believe, Reus, who is one of the precious jewels of Dortmund, can no way be sold in the January transfer window.

Another major newspaper of Germany, Berliner Morgenpost says the player himself has revealed his intentions to continue his career at Dortmund while getting Reus is nothing but a “desire” of David Moyes and it can only be met with a strong financial effort.

As I said yesterday and repeating again that we do trust The Times, and might be there is some truth in the story that United are thinking of selling Kagawa, but player-plus-cash-exchange offers are difficult to conclude because it needs the consent of both parties. For a while, if we simply ignore the financial, contractual obstacles, then also, it is highly unlikely that Reus would welcome a move to a foreign club for no-reason-what-so-ever, especially in a World Cup year.