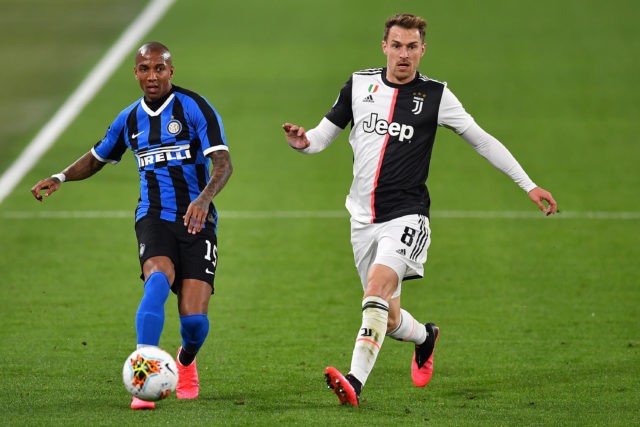 According to The Sun, Tottenham Hotspur are in a position to sign Juventus midfielder Aaron Ramsey as he has been offered to them.

The Wales international is out of favour at Turin and could be set for an exit after just a season as the club look to cope with the financial shortcomings the coronavirus pandemic has caused.

A loan deal could be on the cards, with Juventus and the loaning club splitting his £400,000-a-week wages, and it will be interesting to see if Spurs boss Jose Mourinho is still interested in the 28-year-old.

The Portuguese failed with a bid to land Ramsey in the summer of 2017 after making a discrete enquiry during his days as Manchester United manager.

At the time, Mourinho had told United executive vice-chairman Ed Woodward he regarded Ramsey as a better option than Paul Pogba as he looked to overhaul his squad, and he could finally jump at a chance to land the former Arsenal star.

It’s a decision that will most likely not go down well with the Tottenham fanbase given the Welshman’s affiliation with the Gunners, but it’s one Mourinho could end up making.

Spurs midfield could do with the creativity of Ramsey, and his Premier League experience is a huge advantage.

A loan deal is appealing without a doubt, and the Wales international won’t be short of Premier League suitors this summer given his top quality.