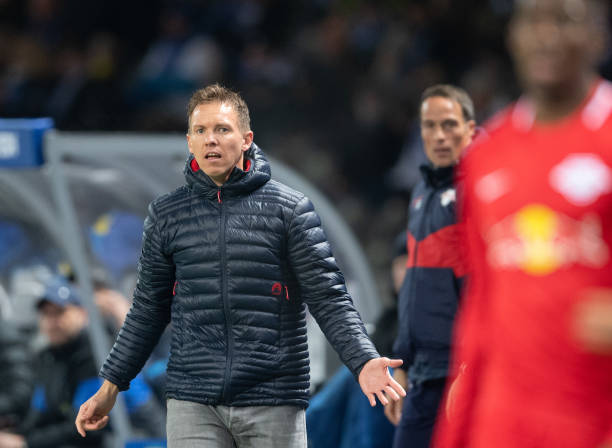 Tottenham Hotspur have reportedly lined up RB Leipzig coach Julian Nagelsmann as one of the candidates to potentially replace Mauricio Pochettino should the Argentine leave the club.

Spurs are struggling in the Premier League so far, picking up just 14 points from their opening 12 games of the campaign, and the manager could leave.

The North London giants want Nagelsmann, but a source close to the German has revealed to The Athletic that their approach has come a year too late.

The 32-year-old left Hoffenheim to join the Bundesliga side during the summer, and he isn’t keen on leaving anytime soon.

He was open to a move abroad during his final season at Hoffenheim, but eventually decided to remain in Germany.

Leipzig currently sit second in the Bundesliga after six wins and three draws in 11 games, and Nagelsmann is hoping to turn them into domestic and continental giants capable of challenging for silverware going forward.

The young boss first rose to prominence during the second half of 2015-16, aged just 28, ensuring Hoffenheim’s survival and then qualifying them for the Champions League the following two seasons.

While Nagelsmann no doubt fits the managerial requirements that Spurs chairman Daniel Levy would prefer, given his age, talent and exciting philosophy, he is currently out of reach following an impressive start to life at Leipzig, and the London club will have to look elsewhere.