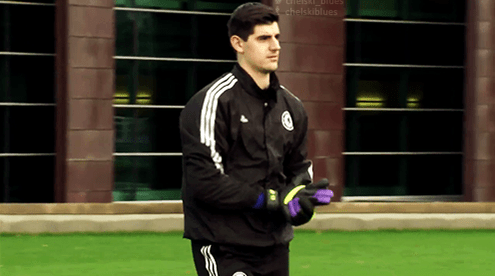 In good news for Chelsea, goalkeeper Thibaut Courtois may not be leaving after all.

The Belgian international has been linked with a summer move to Real Madrid.

It was widely believed by many that a transfer could happen this summer given that Chelsea will not be playing in next seasons Champions League combined with the fact that the player’s family still lives in Madrid.

The 26-year-old also has just one year remaining on his current deal with the Blues and while talks have been ongoing since January, no resolution has yet been reached.

While Courtois does want to one day return to Madrid in order to be closer to his family, it appears that he is happy with Chelsea for now and wants to focus on signing a new contract and extending his stay at Stamford Bridge.

Courtois has also publicly declared that he is happy at Chelsea many times and talks are set to finally reach a resolution after the World Cup in Russia.

This will be great for Chelsea. They will need to re-build as they look to launch a title push next season and Courtois will be important to this process as he is one of the best keepers in the World.