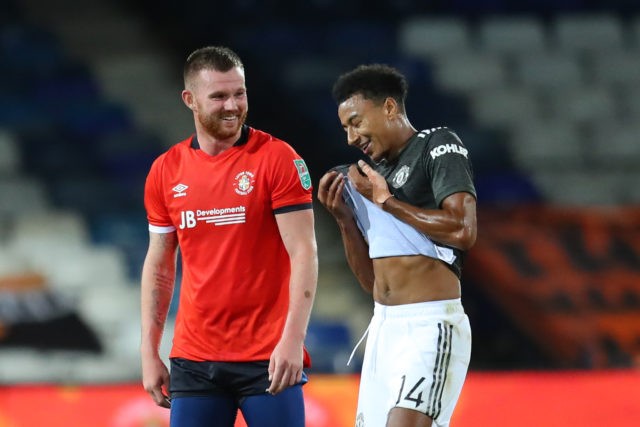 Glasgow Rangers are reportedly looking at the possibility of bringing Jesse Lingard to Ibrox but could face competition from Old Firm rivals Celtic.

The Gers are leading the Scottish Premiership table by 13 points, and it seems Steven Gerrard is already planning to bolster his squad in January.

According to reports from TeamTalk, Lingard will ask Manchester United to let him leave in January as he is struggling to get regular games at the club.

The England international is yet to start a Premier League game this season and has dropped way down the pecking order at Old Trafford.

His contract is set to expire in the summer, but United have an option to keep him at the club for another 12 months.

However, with only two League Cup games under his belt, doubts remain about whether United would exercise that option, especially if they sign an attacking midfielder, either in January or next summer.

If his contract is not extended, Lingard – who is on £75k-per-week wages – is free to leave the club next summer on a free transfer.

Despite his lack of games, the 27-year-old is still drawing attention from a host of Premier League clubs, including Aston Villa, West Brom, Everton and Tottenham Hotspur.

He would be a very good signing for both Rangers and Celtic, but if he will move to Scotland to resurrect his career remains to be seen.

Lingard needs to play regularly, and both the Old Firm clubs can provide him with that opportunity. However, with so many Premier League clubs interested in him, he should look to continue in England’s top-tier football.

The attacking midfielder has made over 200 senior appearances for United since graduating from the club’s youth academy and wants to fight for his United future.

However, United have plenty of depth and quality in Lingard’s position, and it’s high time he moves elsewhere. Having said that, a move to Celtic or Rangers should be his last option.