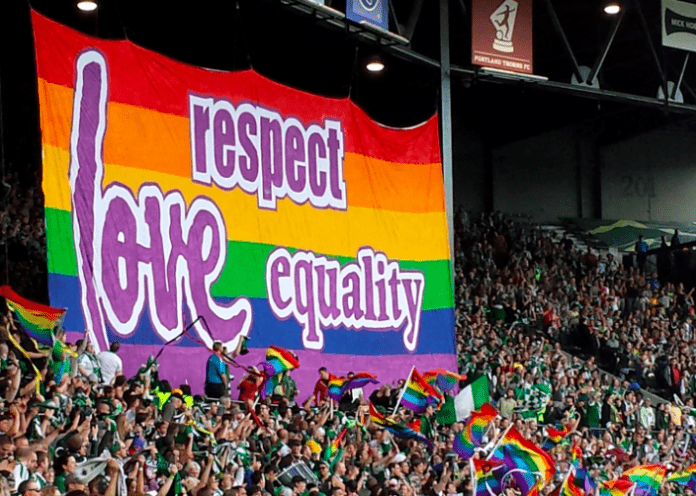 Zero tolerance approach needed towards homophobia in sports, especially football, arguably the most hostile towards athlete with that sexual orientation.

The parliamentary select committee for culture, media and sport claims that football has a particularly hostile culture of homophobia, as compared with other sports.

The report has highlighted football in being extremely antagonistic towards homosexuality, illustrated by the fact that there are no openly gay professional male players in British football. They said football has a “problematic” history with homophobia, with anti-gay chants “relatively commonplace” at games and homophobic leaflets reported to have been handed out outside West Ham United’s ground in 2016.

The committee, chaired by the Conservative MP Damian Collins, argues that football has a more hostile culture of homophobia than other sports.

Greg Clarke, the chairman of the Football Association also told the committee that he could sympathise with a gay male professional footballer not wanting to come out publicly, for fear of the abuse he was likely to suffer, which is why so many players have revealed that they are gay after quitting the game. Clarke told the committee: “There is a very, very small minority of people who hurl vile abuse at people who they perceive are different. Our job is to stamp down hard on that behaviour. That behaviour is disgusting and needs, stamping out and I am determined that we do stamp it out. If I was a gay man, why would I expose myself to that?”

BBC director general, Tony Hall, has been criticised in the report for his response to the critique that he received when boxer Tyson Fury was included in the 2015 sports personality of the year shortlist, despite the boxer’s “numerous violently homophobic comments”. According to the report, the inclusion of Fury, who had made homophobic remarks, is “symptomatic of homophobia not being taken seriously enough in sport, or the media that shows it”. Fury at the time had responded to criticism by saying he “believed in the process” (talking about how the British people decided who won the award).

Sports like swimming and rugby have been commended for their more inclusive nature. The rugby union and league have high-profile gay role models, and strong action has been taken against incidents of homophobic abuse. In November 2014, two rugby fans were banned for two years and each ordered to pay £1,000 ($1,250) to a charity of gay referee Nigel Owens’ choice after the Welshman was verbally abused while officiating an international match between England and Wales at Twickenham.

The wide-ranging report said more should be done to show support for athletes who want to come out.

Damian Collins MP, chair of the Culture, Media and Sports Committee said, “Sanctions appear to be left to the discretion of the club or governing body involved: a zero-tolerance approach to the use of all homophobic language and behaviours must be implemented with standardised sanctions across all sports”.

Citing surveys which suggest that 72% of football fans have heard homophobic abuse at matches, MPs said they were “concerned” it was not taken seriously enough and worryingly enough, often dismissed as “banter”. The report has proposed that lengthy bans should be handed out to fans who hurl homophobic abuse in a “zero tolerance” approach.

More has been spoken about the pressing issue of homophobia in football in the last few years. However, it accounts for nothing if no decisive action is taken.