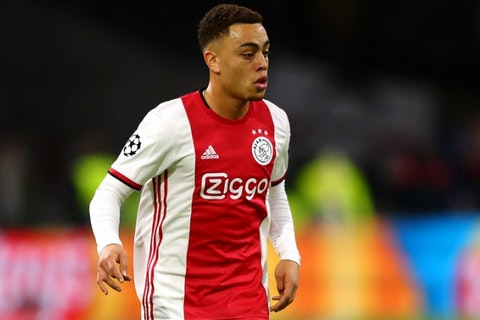 After selling Nelson Semedo to Premier League side Wolverhampton Wanderers, Barcelona has made their interest known in filling the right-back spot with Dest. It is now reported that the deal is in its last steps.

As per Fabrizio Romano, the Spanish giants are now edging closer and confident of wrapping up the deal to sign the 19-year-old defender. Dest who had a very good campaign with Ajax last season has become a target for several top European clubs including Bayern Munich.

The ace journalist shared that although the final agreement with Ajax is yet to be reached and Bayern Munich are very much still in the race for the youngster signature, Barca are convinced of finalizing the deal to secure Sergino Dest very soon.

According to him, there are just a few more steps to close the deal.

Barcelona board are now getting ‘confident’ to sign Sergiño Dest. But total agreement with Ajax has not been reached yet… and Bayern Münich are still in the race. Despite this, Barça are convinced they’ll finalize the deal soon.

Sergiño saga is still on… last steps to go 🚨 https://t.co/S1Ba3jfCYs

Earlier reports revealed that although personal terms have been agreed with Bayern Munich 10 days ago, Dest is now seriously considering a move to the Nou Camp.

While Barcelona are reported to also have interest in Norwich City’s Max Aarons according to Sports Mole, the La Liga top side has their primary focus on the United States International Dest.

It is said that the Catalan giants have upped their bid to sign the Ajax defender and are capitalising on the 19-year-old’s preference for Barca over Bayern Munich as he has been a fan of the Spanish club for a long time.

With less than two years left on his contract, Barcelona will be prepared to cough up to £22.5m to secure the youngster’s signature, especially when add-ons are taken into consideration.

Barca Universal also reports that Ajax has already received an official offer for their player, but no amount is specified yet.

Dest joining the team at Camp Nou will only be a dream come true and believes the decision will be good for his career and development.