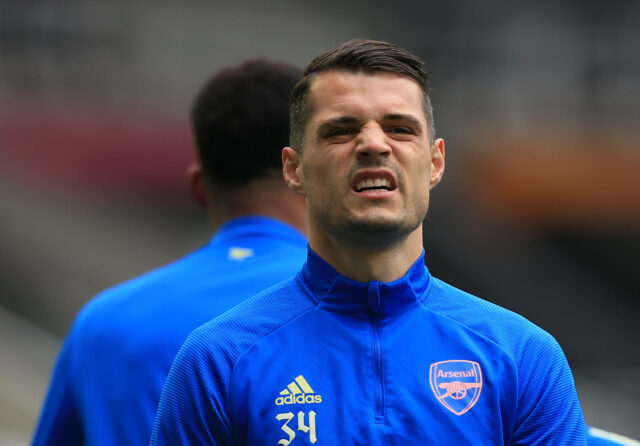 Arsenal midfielder Granit Xhaka could leave the club in the summer transfer window.

According to reliable journalist and transfer expert Fabrizio Romano, Xhaka is being wanted by several clubs, including Roma.

The Serie A giants have appointed Jose Mourinho as their new manager, and the Portuguese boss wants to sign Xhaka.

Arsenal are expected to sell a host of players this summer as Mikel Arteta is looking to sculpt the squad to his own taste.

Romano claims that Xhaka has the chance to leave the Gunners along with the likes of Willian, Hector Bellerin and others.

Several Bundesliga clubs are keen to sign Xhaka, while Roma have opened talks with the player’s agents.

Granit Xhaka has chances to leave Arsenal this summer as Willian, Hector Bellerin and many other players. 🚨 #AFC

AS Roma are interested in signing him and have opened talks with his agents, José Mourinho wants him – also Bundesliga clubs are in the race. @DiMarzio 🔴 #Xhaka

Xhaka has been brilliant this season for the Gunners. It isn’t an exaggeration to claim that he has been one of their best players and has been rightly named in the CIES Football Observatory team of the season.

The Swiss international, who is on £100k-per-week wages at the club, enjoyed his best spell in Arsenal shirt after his red card against Burnley.

Arsenal should look for a dynamic midfielder to replace him if he leaves. His departure could open the possibility for a change in the system to a three-man midfield.

Xhaka has made over 215 appearances for the Gunners in all competitions, but it seems he could be heading out of north London this summer.