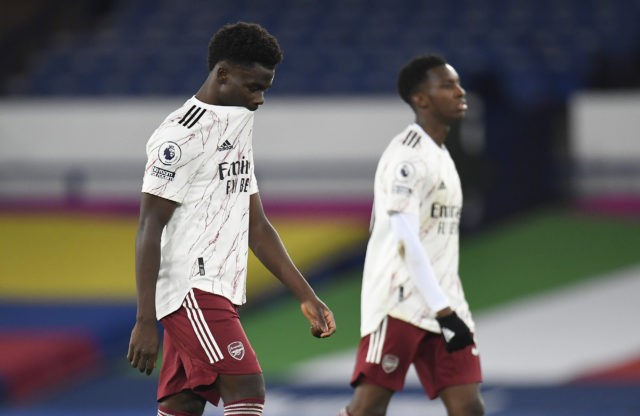 Arsenal boss Mikel Arteta has confirmed in the press conference today that Eddie Nketiah won’t be sold in the January transfer window.

Last week, Evening Standard claimed that West Ham are tracking the 21-year-old striker as they look for a replacement for Sebastien Haller.

West Ham sold Haller for a fee of £20 million to Ajax last week, and David Moyes is keen to reinvest the money in the squad.

Michail Antonio remains the club’s only recognised striker at the moment, and the Hammers are exploring several options including Nketiah.

Nketiah is into the final 18 months of his contract at Arsenal. He has made 12 appearances in the Premier League this season and has one goal to his name.

The report claimed that the Gunners could be interested in selling him permanently as he is yet to sign a new contract. However, Arteta has poured cold water over his potential exit.

When he was asked whether he expects Nketiah to leave in January, the Spaniard replied – ‘No’.

While Nketiah has struggled for regular game time in the Premier League, it seems Arteta wants him to be a part of his squad.

West Ham must now move on to other options. The Hammers have been linked with a move for Josh King of AFC Bournemouth, while Stade Reims striker Boulaye Dia could be another option.

According to reports from Evening Standard, the Hammers have held talks with Dia’s representatives over a possible move. The 24-year-old has scored 12 goals in all competitions and would be a fantastic addition for the club.