Real Madrid midfielder, Luka Modric has been sidelined for the next three months with a thigh injury. The Croatian tore his left proximal rectus femoris tendon while on International duty. The former Tottenham midfielder revealed that he felt a sharp pain in his thigh as he was substituted in the first half of the Euro qualifier in Milan. However, the full extent of the injury was only discovered after a scan, which revealed that the Croatian could be out for as many as 20 games.

Los Blancos have been in stupendous form of late and Luka Modric has been a key player for the European Champions. Most of the free flowing football, Real Madrid have played under Ancelotti, has been orchestrated at the heart of the midfield by the charismatic Croatian. Missing a player like Modric for a crucial three months of the season is a big blow for any side. However, the sensational performances of new signing, Toni Kroos will soften the blow to an extent.

Kroos has been in exceptional form since joining the European champions this summer, and is already being tipped to shatter the records of former stars like Xabi Alonso. With the likes of Khedira and Illarramendi fit and ready to grab the opportunity, Carlo Ancelotti has a lot to look forward to, even without one of the best midfielders in world football.

While it is evident that Carlo Ancelotti has shown a preference for Khedira as the third choice central midfielder, the German international’s contract situation has been a problem for the Madrid hierarchy. Despite offering a renewal, the club has not heard back from Khedira’s agent since July. The world cup winner has been linked with moves away from Spain with the likes of Arsenal and Bayern Munich being mooted as possible destinations.

Recent reports in Spain state that Ancelotti could opt for Illarramendi as Modric’s replacement in the side, especially because of the friction between the player’s camp and the board. In his recent interviews, Carlo has also stated his desire to use Isco as a central midfielder, and with the Spaniard’s recent form, that seems like an extremely tempting option. The likes of Illarramendi and Khedira will provide better support and cover to the centre backs and add some tenacity to the midfield, but Madrid’s flamboyant football and slick attacking play would require a certain level of intelligence, technique and flair which can only be provided by the likes of Modric and Isco. 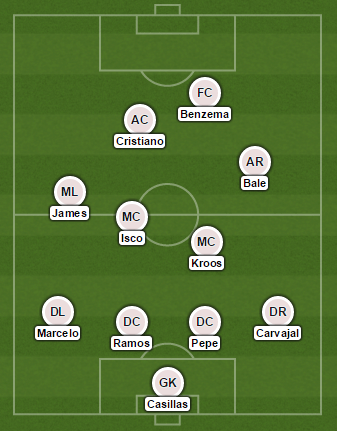 Isco has played in the central midfield before and has been very impressive during the absence of Gareth Bale. Recent comments from the manager and defender Sergio Ramos, shows the importance of the former Malaga man in the current Madrid setup. Also, Isco’s willingness to work hard in defence along with his flair, technique and ability to keep possession should convince the manager, that he deserves the starting berth ahead of anyone else.

While Luka Modric recovers from his unfortunate injury, the time has come for one of the finest young talents in world football, to step up.