Real Madrid have slapped a €90m price tag on Spanish defender Sergio Ramos, making it almost impossible for Manchester United to lure him away from Santiago Bernabeu.

According to Spanish newspaper AS, that is close to Ramos camp, Real Madrid do not want to lose their star defender and won’t accept any player plus cash exchange offers. That roughly means, Real Madrid won’t include David de Gea as a part of the deal for Sergio Ramos. 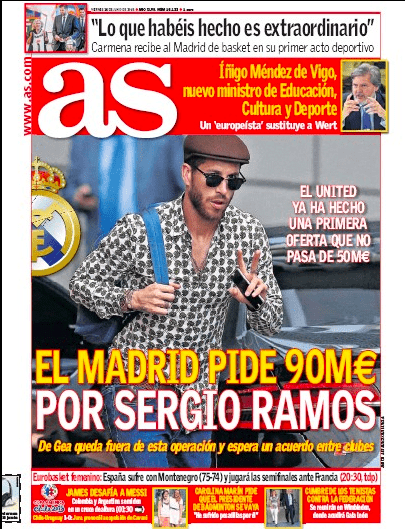 Manchester United had already made a formal approach for Ramos. The Red Devils had apparently offered €50m for the Spain international, but it is way off Real Madrid’s valuation and was rejected immediately.

James Ducker of The Times ran a separate story today, where he reports that Manchester United want Ramos to state publicly his intentions to leave Real Madrid.

The Spaniard has expressed his desire privately to leave Bernabeu and he is considering the possibility of releasing a statement on the transfer matter.

United have been given enough encouragement to believe that Ramos could leave Madrid. The 29-year-old feels that he has been treated poorly by the club and has been angered at attempts in the Spanish media to portray him as a mercenary over his increased wage demands.

The price Real Madrid are asking for Ramos is simply hilarious. Chelsea sold David Luiz for €50m in 2014 and till date it the record transfer for any defender. AS think both the clubs could reach a middle ground here, where a deal can be concluded within €70m, which is still a lot of money to be paid. A cheaper alternative could be Valencia’s Nicolas Otamendi, who would cost around €50m. Incidentally, Real Madrid are seemingly interested in signing the Argentine defender.