Real Madrid have made it clear to James Rodriguez that he won’t be getting enough game time this season. The European champions are ready to sell him for around €75m, according to Marca. [Click to Tweet]

Rodriguez joined Madrid for a reported fee of £63m from Monaco in 2014/15 after impressing largely in the 2014 World Cup in Brazil.

The Colombian can score, provide assists and impacts the game with ease but after a fantastic debut season, he has become too distracted. 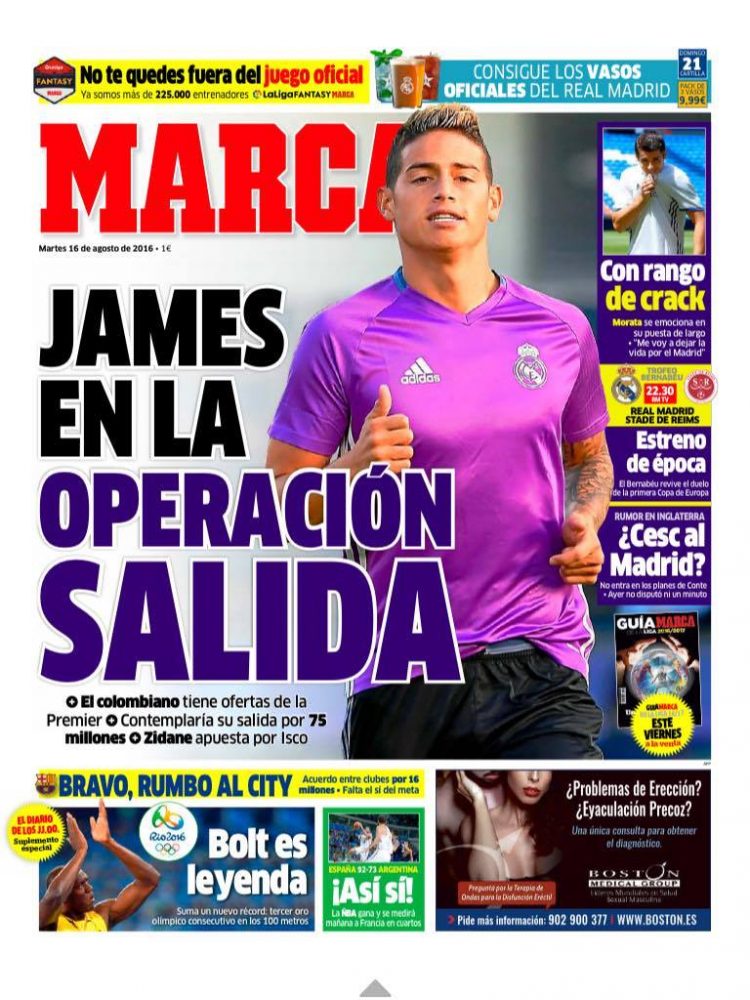 He struggled to cement a place both under Rafael Benitez and Zinedine Zidane and didn’t do enough to prove his worth to the team.

Rodriguez has played 32 matches in all competitions last season and was dropped from starting XI in big games including the Champions League final against Atletico Madrid.

The Colombian has had the backings of both Zidane and Perez, yet he has failed to impress his manager in training.

Players like Lucas Vasquez, Alvaro Morata and Marco Asensio have worked hard to earn a spot on the side whereas Rodriguez didn’t seize his opportunity. He could have easily cut his vacation short and work hard with these players but chose not to do so.

The aforementioned players are nowhere near to James’ potential but their willingness to fight for places has impressed Zidane.

That is why Isco is precisely ahead of James in the pecking order. The former Malaga midfielder has struggled at Madrid and failed to claim a regular starting spot even after three seasons at the club, but he has worked extremely hard knowing he can still be an important player if he performs consistently.

And yet his future lies away from Bernabeu. It is easier to feel for him that he hasn’t been treated fairly, but Zidane probably doesn’t see the competitive edge in him anymore. He is more than happy with the reserve role, and Madrid cannot allow that to happen, considering the amount of money they paid for him.

Manchester United have had shown a strong desire in signing him this summer but will the Red Devils reignite their interest especially after signing Paul Pogba?

Another possible destination for the Colombian could be London, where both Chelsea and Arsenal are seemingly interested in securing his signature.

The Blues are reportedly preparing a €90m bid for the attacking midfielder, while Arsene Wenger is also keen to secure his services.

Interestingly, Rodriguez is not the type of player Chelsea and Arsenal need at the moment. The Blues are in need of signing a defender while the Gunners are actively looking to land a striker before the transfer window closes on August 31st.