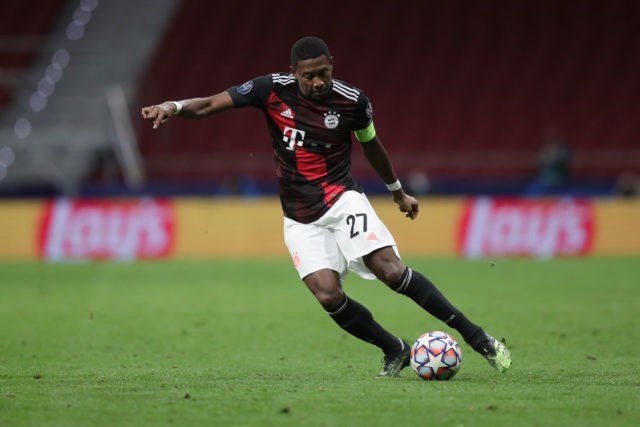 David Alaba’s rumoured transfer to Real Madrid has hit a stumbling block after the player demanded a salary of €13m per year after tax, according to a report by Goal.

Off the back of an incredible treble winning season, Alaba has refused to extend his contract at Bayern Munich, leaving him with just six months left on his current deal. This means he is now free to talk to other clubs over a potential move, and will be available on a free transfer in the summer unless things get resolved at the Allianz Arena.

Several of Europe’s top clubs have been linked with a move for the Austrian, including Barcelona, Manchester United, Juventus, Chelsea, and Liverpool. However, it is believed that Real Madrid lead the way in the chase for Alaba.

But negotiations between the defender and Los Blancos have stalled, after reportedly asked to be the club’s highest paid player, demanding €13m per year after tax (via Goal). This figure would take him above club captain Sergio Ramos, who is believed to be on an estimated €12m per year.

Ramos is also in the final year of his contract, and could leave the Bernabeu this summer. Paris Saint-Germain, Manchester City, and Tottenham Hotspur have all been linked with a move for the World Cup winner.

Meanwhile, it is unclear whether Bayern Munich would welcome Alaba staying at the club after this whole fiasco. Chairman Karl-Heinz Rummenigge said back in November that the “door is still open” for the 28-year-old, while manager Hansi Flick labelled him “very important.

In contrast, board member and club legend Oliver Kahn has played down the idea of Alaba staying at the Bavarians, telling SportBild (via Goal): “We rolled out the red carpet for David Alaba and went to our limits. David did not walk this red carpet.”