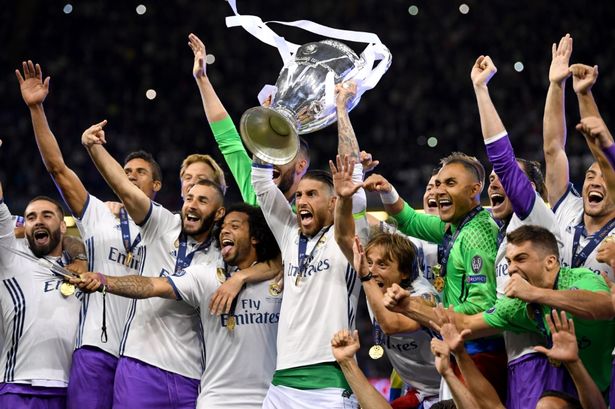 Real Madrid became the first team to retain the Champions League in the modern era on Saturday night, beating Juventus 4-1 in Cardiff to complete a momentous double in 2016-17.

The Spanish side’s supreme second-half performance in the final assured victory, with a Cristiano Ronaldo brace and goals from Casemiro and Marcos Asensio confirming the Spaniards as the champions of Europe.

There was a level of familiarity between the sides, with Madrid coach Zinedine Zidane and striker Alvaro Morata former Juventus players, while Sami Khedira and Gonzalo Higuain were also playing against their old employers.

The game started at a frenetic pace, with the Italian side coming out of the blocks the quicker and looking to dominate possession in midfield.

While many expected Juventus to put in a defensive display, it was the Turin side that did the early running and Miralem Pjanic commanded a smart early save from Keylor Navas low to his right.

However, in a prime example of just how dangerous Madrid are as an attacking unit, Ronaldo swept the ball home from 18 yards after a quick counter attack to break the deadlock after 20 minutes.

Juventus refused to let the goal break their spirits though and a sublime Mario Mandzukic volley levelled the scores shortly after.

Following an excellent Bianconeri team move, the Croatian striker acrobatically volleyed the ball past Navas, in a goal not dissimilar to the one Zidane scored against Bayer Leverkusen in the 2002 Champions League final at Hampden Park.

While the score was level at 1-1 at half-time, it was Madrid that reacted in the opening moments of the second half, with Juventus’ snappy passing and high energy being replaced by mistakes.

Casemiro put the La Liga outfit back in front from long range, but Gianluigi Buffon was unfortunate to be beaten as the shot took a wicked deflection off Khedira.

Ronaldo ended the game as a contest shortly after, with Luka Modric making it to the byline and crossing for the Portugal international to convincingly finish at the Juventus near post.

With the Spanish contingent in the Millennium Stadium crowd already celebrating, substitute Asensio scored from close range in the dying minutes after a powerful run down the left from Marcelo.

To further compound Juventus’ woes, Juan Cuadrado was sent off for a second bookable offence after an alleged stamp on Sergio Ramos, but the Madrid captain did not cover himself in glory with his over-reaction.

For Juventus, defeat is a hammer blow after the Serie A side were beaten at the final hurdle two years ago by Barcelona.

Neutrals would liked to have seen Buffon add Champions League glory to his esteemed list of achievements, but on the night Madrid were simply too good.

While Ronaldo’s performance all-but wraps up the Ballon d’Or for another year, the likes of Modric and Isco were simply too illusive for the Juventus midfield to shackle and the Italians were punished as a result.

A 12th European crown again writes Madrid’s name in the history books again, while Zidane is starting to look just as mercurial off the pitch as he was on it.