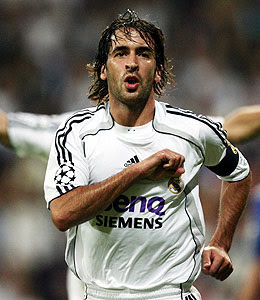 Bundesliga side Schalke have confirmed the signing of former Real Madrid captain and legend Raul Gonzalez on a free transfer.

The 33 year-old striker was no longer needed at Madrid following the signing of younger superstars like Benzema, Higuain, and Ronaldo. Raul announced his departure on Sunday, and has been linked with a move to Schalke since the beginning of the summer. Raul represented Madrid on 741 occasions, smashing 323 goals into the net in that time. The Spaniard has 102 caps for his national team winning 16 major titles with Los Blancos.

The forward will undergo a medical on Wednesday and then sign a contract should his medical be successful. Raul is to join his new team-mates this afternoon to get to know them better and present himself to the side.

“This is great news for Schalke 04. I’m absolutely delighted that we’ve managed to lure a player like Raul to the Bundesliga and to Schalke. He’s a world-class forward and an extraordinary player.”

Schalke coach Felix Magath was quoted as saying on the club’s official website.

“His qualities will help us make the next step in our development as a club. His capture is decisive in our ambition to rebuild the squad and to prepare the team for the future. I’m looking forward to working with Raul.”