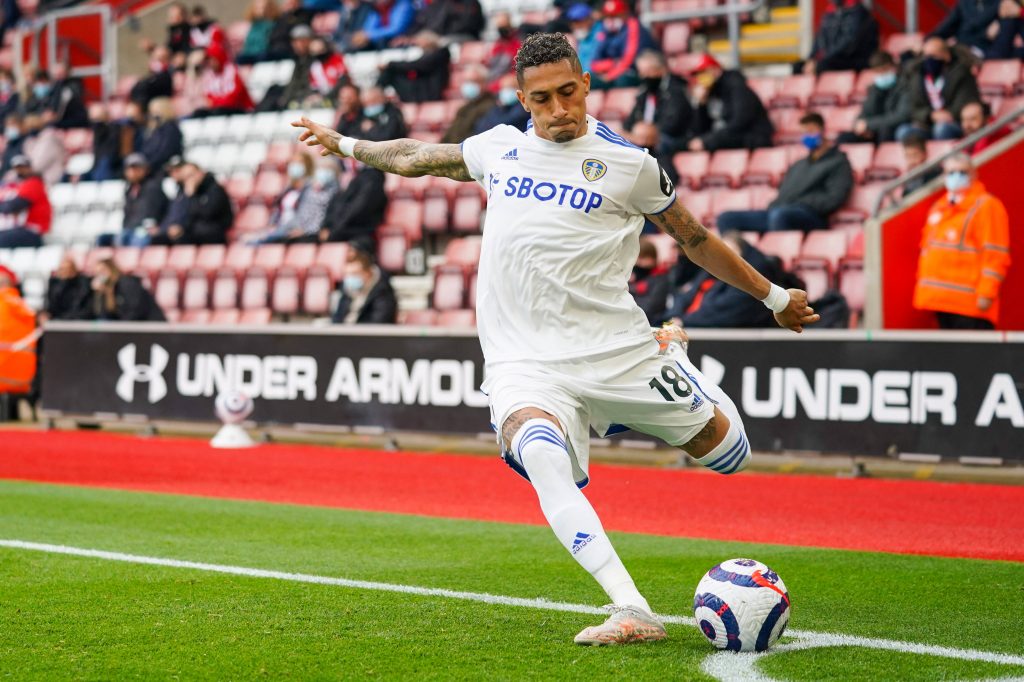 Leeds United winger Raphinha has reacted to the reported transfer interest from Manchester United and Liverpool ahead of this summer’s transfer window.

The Brazilian joined the Whites from Rennes last summer and had an impressive debut campaign, registering eight goals and 11 assists from 38 appearances.

His progress has caught the eye of several European clubs, and he has regularly been linked with United and Liverpool over the past few months.

When asked about the speculation by UOL Sport, Raphinha said that he grew up watching some of the leading players in the English top-flight.

However, the 24-year-old emphasised that he is clearly happy at Leeds and has no plans of leaving the Yorkshire outfit anytime soon.

He said: “It is difficult to explain how I feel when I hear speculation about giant teams like Liverpool and Manchester United being interested in signing me.”

“Man, I grew up watching these teams on TV. I saw Rooney, Van Nistelrooy, Cristiano Ronaldo, but I also saw Gerrard, as well as others like Henry, Deco, Lampard.

“Today, I’m making people happy with my football. I am not only talking about the other clubs but also Leeds, who were the ones who took a chance on me.

“I have three years remaining on my contract, and I’m not even thinking about leaving here for exactly this reason: I am happy and making others happy.”

Raphinha had a good debut campaign in England, and he managed to settle instantly unlike club-record signing Rodrigo, who had a slow start to his career.

The right winger has three years remaining on his contract, and Leeds won’t be tempted to sell him unless a significant offer arrives this summer.

Liverpool had a disappointing defence of their league title, and they are looking at reinforcing their attack ahead of next season.

Raphinha could be on their wishlist this summer, but they may struggle to lure him without the assurance of a starting role in the league.

Mohamed Salah is a guaranteed starter on the right wing, and Raphinha is unlikely to leave Leeds to sit on the bench with the Reds.

United are possibly a better destination for the winger if he decides to pursue a fresh challenge away from the Whites.

The club are known to be on the hunt for a right winger, and Borussia Dortmund’s Jadon Sancho is the top target for manager Ole Gunnar Solskjaer.

However, things could change in the coming weeks if they decide to spend big to land wantaway Tottenham Hotspur striker Harry Kane.

In that case, they may look at low-cost alternatives to Sancho. Raphinha could be a quality option to improve their creativity from the right wing.

Barring Mason Greenwood, no one else has sufficiently impressed from the position for United over the past year. Raphinha would be assured of regular game time.

Raphinha seems happy at Leeds, but it remains to be seen whether his stance stays the same if there is a formal approach from a high-profile club.

Borussia Dortmund have also been credited with an interest in him, as they weigh up possible replacements for Sancho ahead of the summer.