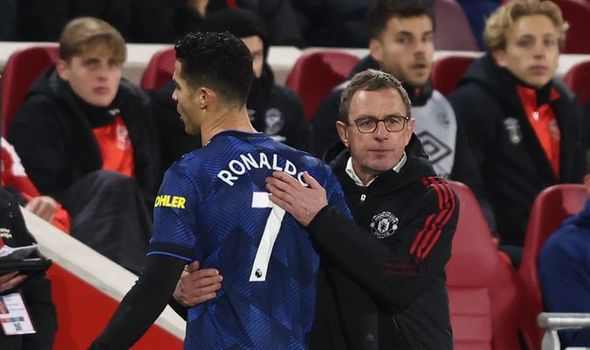 Ralf Rangnick is skeptical about Ronaldo’s ability to perform next season and wants him out.

Manchester United manager, Ralf Rangnick is reportedly is not sure whether Cristiano Ronaldo is the right player for the team.

2022 does not really smile on Cristiano Ronaldo. The Portuguese, who scored 14 times in his first 20 outings since returning to Manchester United last summer, has had a dismal record so far this calendar year, having only found the net once in ten appearances.

This is a major issue that Ralf Rangnick has observed.

However, the Red Devils caretaker manager does not have a sufficiently fit and energetic competitor – Edinson Cavani (35) has been injured very often in recent weeks, Marcus Rashford (23) is struggling for consistency and Anthony Elanga (19) is seen more as a winger.

Rangnick, who will become a sports consultant at Old Trafford on July 1, believes that the five-time Ballon d’Or, under contract until June 2022, can’t be the team’s attacking leader next season. The German tactician, who has repeatedly benched or replaced the star, has already let his superiors know that they absolutely must strengthen this summer with a younger striker.

He has also asked the club to phase out the former Real Madrid man.

And Ronaldo is unlikely to accept a change in role.

Moreover, in recent weeks, he has undoubtedly felt the wind turn since he spoke with his representative Jorge Mendes, who himself discussed with the club on this subject. Some European clubs are already monitoring the situation The reunion between Cristiano Ronaldo and Manchester United may not last very long. But then again, it was bound to happen at some point.

In recent months, Manchester United have been linked with the likes of Harry Kane and Erling Haaland. And if Rangnick gets his wish, it is likely that Ronaldo will be looking for a new team in the summer.