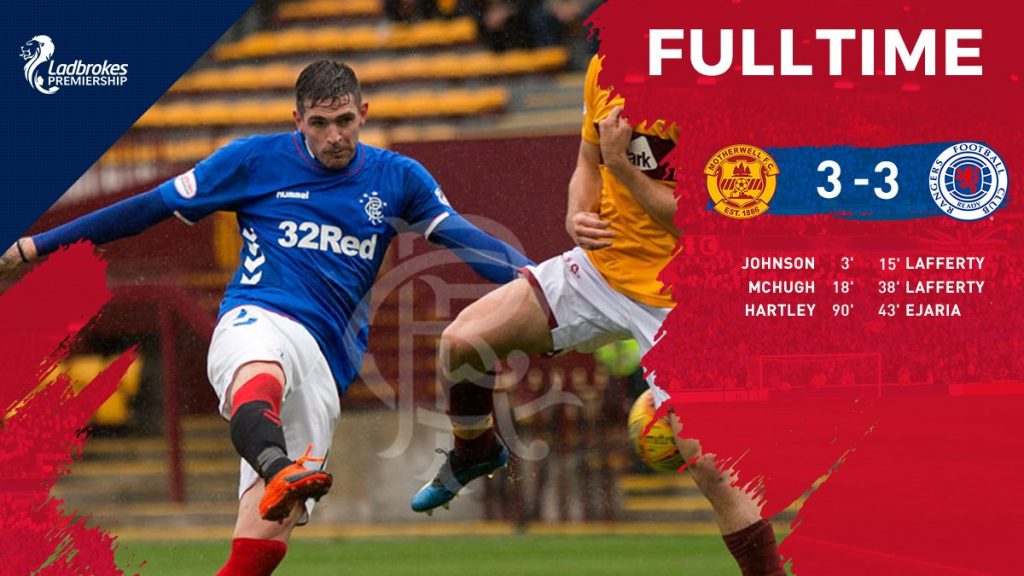 Rangers were held to a thrilling 3-3 draw against Motherwell over the weekend.

Steven Gerrard’s side were close to securing the three points away from home but Peter Hartley’s 94th-minute goal denied them a win.

However, the Gers still managed to extend their unbeaten record to 11 matches.

The Scottish giants have had a good start to their season but Gerrard will be unhappy after his side failed to grind out the result.

Despite trailing twice, Rangers managed to get back in front and stay in the lead until the last minute of injury time.

Johnson and McHugh had put the home side in the lead with two goals within the first 18 minutes.

New signing Kyle Lafferty put on an inspired showing against Motherwell after re-signing for his boyhood club last week. The experienced striker scored twice in the first half and Ejaria added a third to put Rangers in the lead.

The draw was Motherwell’s first league point of the season.

As for Rangers, the Scottish outfit will now concentrate on their game against FC Ufa. They managed to grind out a 1-0 win in the first leg and Gerrard’s men will now look to finish the job in Russia.

Here are some of the best fan reactions from the Motherwell vs Rangers clash.

We never learned all 2nd half, never had an out ball for someone to run at them. We’ll get better I have no doubt, still undefeated but another punch in the guts from a last minute equaliser.

Why the FUCK are a Rangers team going away to Motherwell a goal up in the second half a defending like they’re playing Barcelona?. Sat back whole second half. Shocking tactics.

Can someone explain to me the thinking behind that sub with last kick is the game? Gave that game away and didn’t get going at all 2nd half

Poor defensively from set-pieces today. Need to learn to see out a lead. In hindsight, should be sitting on 9 points. Learning curve though.

Really poor second half performance and lucky to get a point.

No need to defend so deep and invite pressure.