After the signing of Robbie Keane to Celtic last night, a new excitement surrounds the pulsating finale between Rangers, Celtic and Hibs as they enter the final 15 games of the SPL season. The end of the road still isn’t in sight and alot of football still has to be played from now until May including two Old Firm matches which could ultimately decide where the SPL trophy will rest for the next year.

Mendes will be a loss for Rangers

The league leaders Rangers finish January with a weaker squad after the sale of Pedro Mendes for Sporting Lisbon for £1.5m last weekend and despite a gallant effort by Walter Smith to capture a new signing before the end of the midnight deadline, the lights at Murray Park were reluctantly switched off early as the Rangers fans had to accept no new arrivals at Ibrox and seeing their rivals steal the limelight with their signings of Diomansy Kamara and Robbie Keane.

On a more positive note for the Gers, their top stars still remain under contract at Ibrox which is was the main importance for the club during the transfer window. Reports this morning were suggesting that Rangers had rejected a last-gasp attempt from Tottenham to lure Allan McGregor to London for £4m.

After an unsuccessful African Cup of Nations, Madjid Bougherra will return to Glasgow this week knowing that his future will remain in the West of Scotland, at least, until the end of the season. The most important thing for Rangers in my view, was keeping classy midfielder Steven Davis who has been on red-hot form this season with 13 assists from midfield.

The futures of Kris Boyd, Danny Wilson and John Fleck are still not sealed but Rangers will take some comfort that they will be wearing the famous blue jersey until the end of the season.

Celtic stole the headlines with their signing of Keane

Celtic stole the news on deadline day with their ambitious signing of Robbie Keane on loan until the end of the season from Tottenham. Due to the media frenzy over Keane’s arrival, alot of attention from Celtic’s other new signings Edson Braafheid, Paul Slane and Diomansy Kamara was diverted which probably meant alot of fans didn’t know about these additions.

Tony Mowbray has bought himself more time in the Celtic hotseat as the jury is still out over new signings Ki Sung-Yong, Marc-Antoine Fortune, Landry N’Guemo, Zheng Zhi and Jos Hooiveld. Keane will make his debut for Celtic this evening at Rugby Park and a new anticipation surrounds Mowbray’s new look Celtic side as they attempt to claw back a 10 point deficit starting at Kilmarnock, their game in hand over Rangers. 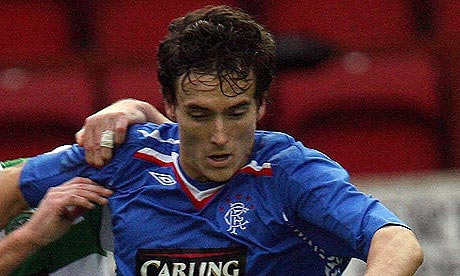 The talented Gow in an unsuccessful spell at Ibrox

Not to forget John Hughes’ Hibs who have been impressive this season after adding some excellent signings in the summer. January on the whole was quite quiet for the side from the capital, but they did add former Rangers striker Alan Gow in the late hours of deadline day.

Gow, can either play as a striker, just behind or on the left of midfield which should add options to Hibs’ attack which already includes the in-form Anthony Stokes, Derek Riordan, Colin Nish and Benji. The 27-year old joins from Plymouth Argyle on loan until the end of the season and should bolster Hibs’ ambitions of a Champions League position.

Hughes’ men have proven against the Old Firm they are capable of having a say in the title race after a dramatic victory at Celtic Park last Wednesday and a 1-1 draw against Rangers at Ibrox in 2009.

The season will come to a dramatic climax in May, but all three clubs have a significant part to play in an exciting SPL title race with the level of excitement struggling to be matched by a number of top European leagues. February is set to be an exciting month with Hibs travelling to Ibrox on the 14th and the Old Firm derby on the 28th, both games televised live on Sky.