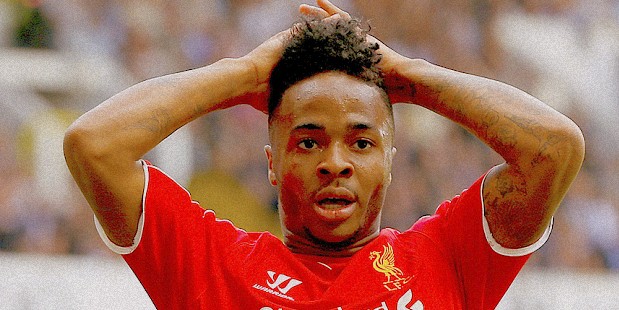 Raheem Sterling is a terrific young talent. He is fast, skilful, technically gifted and versatile. At 20, he is already an established Premier League star and is a first team regular for his country as well.

Under the tutelage of Brendan Rodgers, he has progressed rapidly in the past couple of years. And although Sterling is far from the finished product, the youngster has shown maturity beyond years to become one of the key players for Liverpool.

Sterling’s burgeoning progress has seen him becoming the focal point of Liverpool’s attack this season, following the departure of Luis Suarez and injury to England striker Daniel Sturridge.

He is pivotal to Liverpool’s attacking system and has played a major role in the club’s dramatic revival in the second half. He was used as a winger, did his job as wing backs, played in the no 10 role and carried the task out as a lone striker (false nine role) – he excelled whenever and wherever the team needed him.

If anyone who deserves a fat contract at Liverpool, it is him. And there lies all the drama and tension that is slowly reaching the stage where Liverpool fear they might lose their golden boy next summer.

Liverpool have already offered him a brilliant contract, thought to be around £100k-per-week with added incentives, which was rejected. The Reds manager Brendan Rodgers is hopeful that the England international at some point will put pen to paper but even he was taken aback with Sterling’s strange decision of turning down such a lucrative deal.

News coming out from the Sterling camp is that the European Golden Boy is refusing to commit his future and has even rejected a £180k-per-week deal at the club!

If the report turns out to be true, then it represents a sad state of affair for the club and the player. It is day light clear that Sterling is being misguided by his advisors.

Former Tottenham manager Harry Redknapp believes that Sterling should feel lucky to be playing for such an iconic club and hence should sign a new deal.

“Sign your contract. You are at a great club, you are playing regularly, you have become an England international, you’re learning the game.

“You are at a fantastic club, one of the best football clubs in the world. You are lucky to be playing at a club like Liverpool. Get your nut down, do your job, and the rewards will keep coming.”

Rodgers recently has admitted that any contract talks with Sterling will take place after the end of the season, as the forward wants to focus on his game instead.

It is pretty obvious that Sterling is playing the waiting game here. He could be eyeing a move to any top European club should the Reds fails to qualify for the Champions League next season.

Premier League heavy weights Arsenal and Manchester City have shown an interest, but knowing how things panned out for Luis Suarez earlier, Liverpool in all probability would resist the temptation of selling him to any rival club.

There are even suggestions that Sterling now has what it takes to be the next Real Madrid’s Galactico. Spanish football expert Guillem Balague wrote:

“It may be a little bit too early for this but what do you think about Sterling being the next Galactico?“I say Sterling for one reason. He is obviously going to or already arrived at what it will take for him to be one of the best players in the world.”

Sterling is a special talent, no doubt, but he is not yet ready to play for Real Madrid. As for the Los Blancos are concerned, certainly it is not the right environment for them to buy yet another pacy British winger!

In a way, we have a typical Paul Pogba like situation at hand. Should the club risk breaking the wage structure to accommodate a prodigiously gifted youngster?

One thing is for sure, we could have a fascinating transfer saga at hand, if the contract talks continue to hit the impasse.