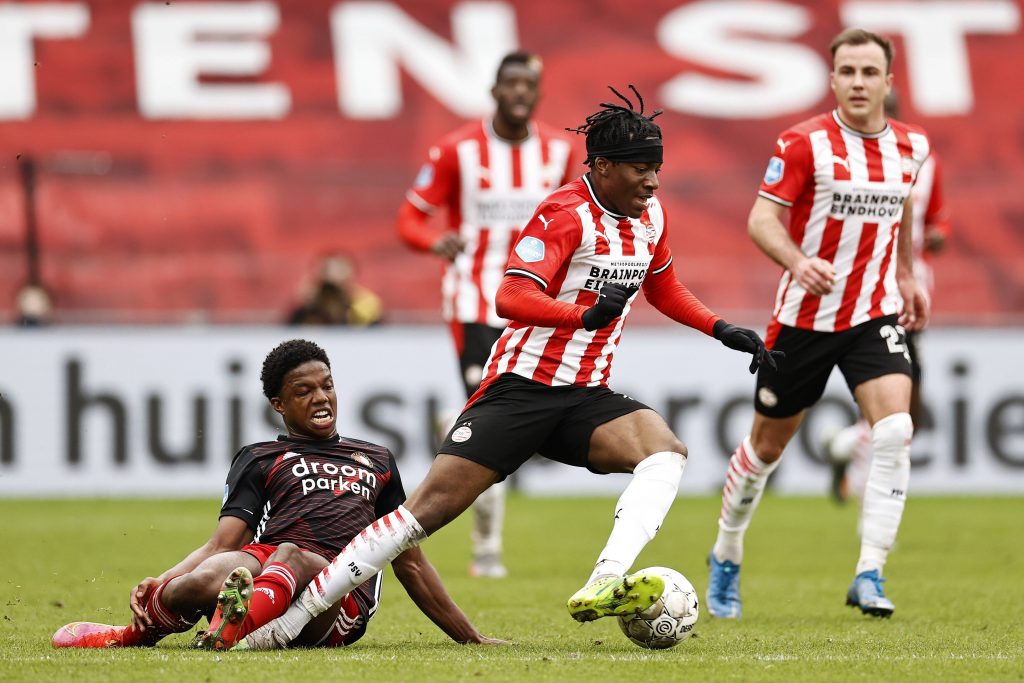 According to the Evening Standard, Leeds United are keeping a close eye on PSV Eindhoven star Noni Madueke.

The 19-year-old, who is also eligible to play for Nigeria, made his international debut for England in their 2-0 defeat to Portugal in the Euro Under-21 Championship on Sunday.

Leeds, alongside Crystal Palace and Bundesliga giants Bayern Munich, have “already started putting feelers out” for the London-born attacker.

“He’s a powerhouse of a player, technically very good, left-footed and likes to come in off the side of the pitch, off the right and go and link,” said England U21 coach Aidy Boothroyd, speaking to the Evening Standard.

Madueke’s debut lasted 72 minutes before being replaced by Conor Gallagher, and his bright and energetic display was a silver lining in an otherwise poor performance from England.

After an impressive return to the Premier League, Leeds will be looking to add reinforcements to their squad ahead of the 2021/22 campaign.

Snapping up the services of Madueke would be a shrewd bit of business for the Whites, with his performances rapidly catching the eye of clubs across Europe.

After breaking into PSV’s senior squad this season, the right-winger has recorded 13 goal contributions in 19 Eredivisie appearances, registering seven goals and six assists.

Despite his league appearances predominately coming from the bench, the youngster’s impact is clear to see, and securing his signing would provide strong competition for Raphinia, Jack Harrison and Hélder Costa.

Madueke’s clinical nature in front of goal has been heavily influenced by a former Manchester United and Real Madrid striker.

Ruud van Nistelrooy works in the PSV academy and is on hand to offer guidance and advice to Madueke whenever called upon.

Madueke, also speaking to the Evening Standard said: “He’s simplified the game for me in terms of giving me options when I have the ball. He’s made the game easy for me to play.

“In terms of my goal scoring, getting into the box, scoring off one-touch and scruffy goals. Not always a worldie goal. That’s what I’ve learnt from him.”

Leeds’ 45 goals scored in the Premier League this season has only been bettered by Manchester City, Manchester United, Leicester City, Spurs and Liverpool.

Madueke’s direct style of play makes him the perfect fit for Marcelo Bielsa’s side, who have provided some of the league’s most thrilling spectacles this season.

With it looking increasingly unlikely that Leeds will be able to hold onto Raphinia after his dazzling start to life in the Premier League, Madueke would be an ideal replacement and the summer transfer window marks the perfect time for him to return to England.

Do you believe Noni Madueke would be a smart signing for Leeds? Let us know on Twitter.

In other news, British Airways are reportedly in discussions with Tottenham Hotspur over £250 million stadium’s naming rights.