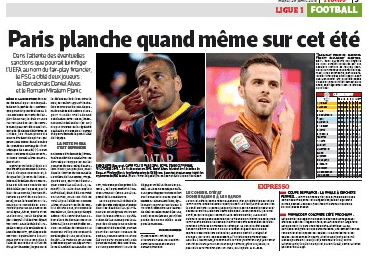 The 24-year-old has also been targeted by several Premier League clubs this season. We reported during the January transfer window that Manchester United are keen to signing him, while last month reports emerged that Liverpool are showing interest in the Bosnian international as well.

Pjanic’s current deal at Stadio Olimpico expires in June 2015. Though Roma officials are certain about extending his contract, reports in Italy suggest that the contract talks between the club and the player appears to have stalled at the moment.

The Giallorossi are possibly working on a solution with Roma’s director Walter Sabatini confirming that the club are preparing to offer a long term contract to the Bosnian international.

PSG are one of those club that under scrutiny of UEFA for breaching the Financial Fair play rules. However, L’Equipe suggests that the French outfit are still looking for reinforcements in the summer.

Juventus midfielder Paul Pogba was thought to be PSG’s prime midfield target but the French midfielder could join either Real Madrid or Manchester United, so, they’ve turned their attention to Pjanic, who has enjoyed a fantastic season with Roma.

PSG are also looking to sign a world class right back and are targeting Barcelona’s Brazilian right back Dani Alves.