A new twist in the Angel di Maria saga has come up. Bayern Munich have joined the race to sign the Argentine, but Spanish newspaper AS believe that the move is too late as the winger is all set to join PSG.

To be honest, we’ve been hearing this for quite some time now. We all know, PSG want to sign him and are even willing to pay €80m for him. But there is this obstacle called FFP that is keeping their high flying ambitions in check.

So, what alternative do they have? Both French and Spanish media have time to time noted that the only way PSG can buy Di Maria (note they already paid a ridiculous sum for David Luiz) is by selling some of their star players to recoup the money. At this moment, Edinson Cavani represents the best value but there aren’t many clubs around who can actually pay north of €80m transfer fee. 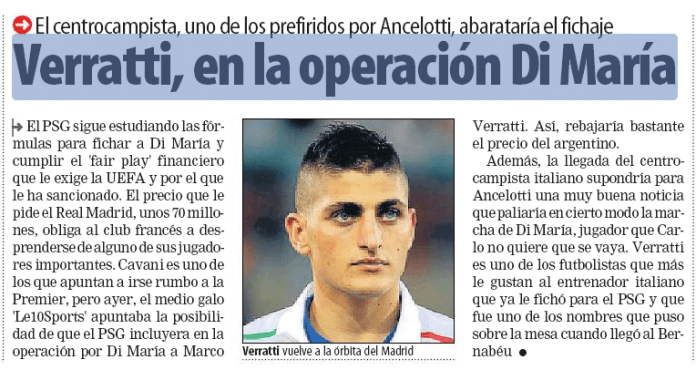 Mundo Deportivo reckons that PSG are considering the possibility of including Marco Verrati as a part of the deal for Di Maria, to lower the fee and comply with financial fair play rules. Carlo Ancelotti is happy with this option as he likes Verrati a lot, having signed him at PSG, and wanted to bring him at Madrid before.

Veratti is also known to be a reported target of Manchester United, with reports from Le 10 Sport claiming recently that the Old Trafford giants could be willing to make a big financial effort to secure his services.

Last but not the least – a) the report has come from the Catalan press and b) frankly, we are now tired of this saga!