Barcelona have signed Luis Suarez from Liverpool for a mega deal of around £75m. How come Real Madrid not do a similar sort of galactico signing and impress their fans? They have already signed Toni Kroos from Bayern Munich, but all their attention have shifted towards James Rodriguez, the boy wonder who stole the show in 2014 FIFA World Cup in Brazil.

However, he would cost around €80/85/90m depending on which paper you read and that seems a hell lot of money. Madrid are therefore looking to offload one of their star players to balance the books. In comes James Rodriguez and out goes Angel di Maria – to put it simply.

Madrid are looking to recoup a fee around €50/60m for Di Maria and it is doesn’t need any rocket science to understand which clubs can really afford to pay that price. Manchester United have been heavily linked with a move for the Argentine with El Confidencial reported last month that famous agent Jorge Mendes is masterminding a move to bring him at Old Trafford. 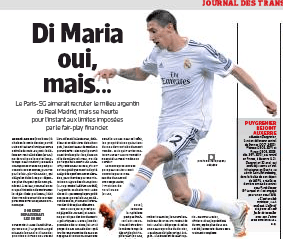 Likewise, there has been a strong interest from PSG as well. L’Equipe today ran a story where they claim the interest is genuine for Di Maria but PSG are finding hard to comply with Financial Fair Play regulations and having already splashed a huge money on David Luiz, they cannot afford to spend recklessly again on another marquee name.

Along with that comes the salary part. Di Maria would demand a salary of €8m per annum, and PSG will have to sell either of players like Javier Pastore, Lucas Moura, Marco Verratti, Ezequiel Lavezzi or Edinson Cavani to finance the deal.

Manchester United do not have the problems of meeting FFP rules but the question is will they pay such a ridiculous sum on one single player?