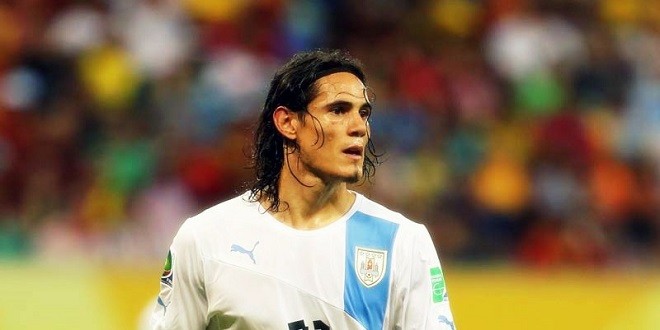 Cavani, whose contract at Napoli runs until 2017, finished last season as Serie A’s top goal scorer with 29 goals as the Azzurri finished runners-up to champions, Juventus. Nick-named ‘Il Matador‘ in Italy, Cavani has scored a remarkable 104 goals in 138 Napoli appearances, averaging 26 Serie A goals per season in three seasons at the club.

Reports from Italy suggest that PSG are the first club to have offered at least the €63 million that Napoli president De Laurentiis is demanding to trigger the buy-out clause in Cavani’s contract.

Throughout the summer rumours about Cavani’s proposed transfer has been dominating the transfer headlines, with talk of bids from the likes of Real Madrid, Manchester City and Chelsea as well as PSG. However, until now, no club been prepared to offer the buy-out figure Napoli are demanding.

“We presented an offer to De Laurentiis that I consider to be very interesting.

“We are pursuing negotiations. We remain in contact and there could be new developments over the next days.”

Should Cavani complete his transfer to Paris Saint Germain, where does this leave their current top striker, 31-year old Swede Zlatan Ibrahimovic? Certainly, PSG coach Laurent Blanc has moved quickly to quell speculation that Cavani’s possible arrival could threaten Ibrahimovic’s position at the club by emphasising that the pair would make a perfect striking duo.

But there is intrigue in the air amidst suggestions that Ibrahimovic is seeking to follow former PSG coach Carlo Ancelotti to Real Madrid.

And, interestingly, Blanc omitted Ibrahimović from his 27-man squad for their pre-season trip to Austria but explained to the media that the Sweden international had been given extra time off.

However, suspicions were aroused when Blanc appeared to strengthen his interest in signing Edinson Cavani soon after discovering that the giant Swede had instructed his agent Mino Raiola to sound out Ancelotti about moving to Madrid this summer. It is even suggested that Ibrahimovic would be prepared to accept a significant salary cut to make the deal happen.

A further twist in this tale is that Raiola is the agent of both Cavani and Ibrahimovic. Raiola, like Blanc, has been quick to quash rumours about the Swede seeking a move and has stated his belief that the pair would be a success at PSG.

Ibrahimovic is no stranger to the transfer system. The 6’5″ striker has played for seven major clubs in five European countries. During his illustrious 14-year playing career, he has amassed a total of 269 goals in 536 games. And, despite his age, Ibrahimovic is still hot property.

His career has gone from strength to strength in recent years. In the past three seasons at AC Milan and PSG he has scored a remarkable 91 goals in 131 games. Last season he scored almost a goal a game for PSG.

If the rumours are true, Ibrahimovic will have no shortage of suitors. For, in addition to Madrid, he has been linked in recent months with several other top clubs including Juventus, Chelsea and Manchester City.