Preview: The United States versus North Korea DPR in the quarterfinals of the Under-20 World Cup in Canada 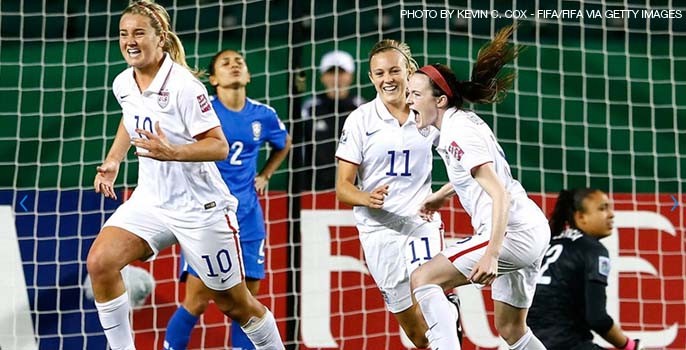 The U.S. will be looking to get into the semifinals of the U-20 World Cup and improving their record to 3-0 over the North Koreans in U-20 World Cup history.

The Yanks will be facing the North Koreans on Saturday at BMO Field in Toronto, CA. in the quarterfinal stage, as the USWNT embark on the road of wining their fourth U-20 Women’s World Cup out of a possible seven.

The U.S. got out of the group stages by narrowly beating Brazil 1-0 in the second match, and by defeating China PR 3-0 in the final group match on Tuesday. The Stars and Stripes came out of group B in second place with six points, and one point behind Germany.

The main weapon for the Americans to defeat the stingy North Korean defense is their 20-year-old forward Lindsey Horan, who currently leads the Yanks with three goals out of the four the U.S. has scored; and she is currently sitting in sixth place of the Golden Boot race.

The speedy and physical forward has a shark mentality when inside the box, not only for the national team but for her club team in France, Paris Saint-Germain FC. In the two season for PSG the young American forward has scored 31-goals in 38-appearance.

Another way the Americans will win the game is by controlling the midfield. The midfielders will need to continue the good form they showed against Brazil and China, and take control of the field and make sure to feed Horan the ball in the penalty box, to cause some havoc for the Asian side strong defense. However, if the midfield performs as they did in the opener against Germany they could be in for a long 90 minute on Saturday.

For the North Koreans side to win the game and possibly get their second U-20 World Cup title, their defense will need to keep up their tough and stingy play against the U.S. quick moving offense. Also they will need their offensive mastermind RI Un Sim to continue her good form by already scoring two goals and dishing out two assists in three games.

For the North Koreans to win this match, they must have Sim run the offense and keep the ball away from the U.S. midfield. They must also make the possession of the ball count, and force the Yanks to chase them around the field, and repeat what the Germans did to the USWNT.

The U.S. offensive power and the strength in their midfield will carry them to their third victory over the North Koreans in U-20 World Cup play. The Yanks will be waiting for the winner of Nigeria versus New Zealand that will take place on Sunday at Moncton Stadium in Moncton, CA, to decided who they will be facing the semifinal match.