Premier League clubs have struggled to register profit despite posting record revenues of £3.6bn in 2015-16.

According to reports from Deloitte (via The BBC), the top 20 Premier League teams have collectively made a pre-tax loss of £110m.

The two wealthy Manchester clubs – Manchester United and Manchester City – have seen their revenues increase by a total of £160m.

The amount is staggering and is roughly half of the total revenue growth recorded by the Premier League clubs. 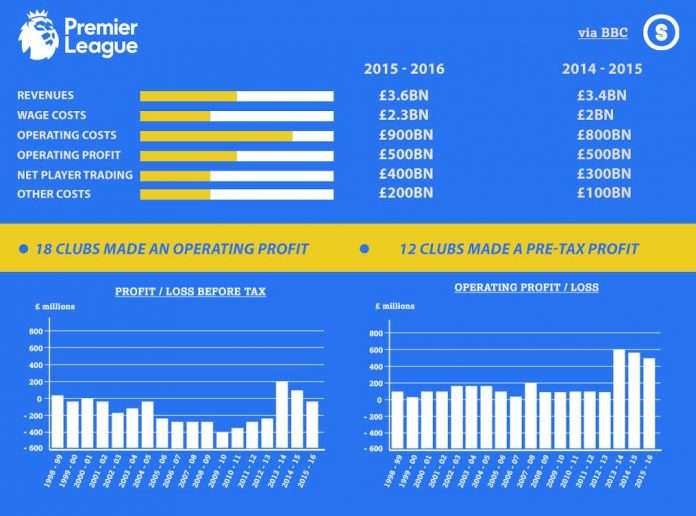 However, the player expenditures, operating, and one-off charges are the central factors behind their loss.

Manchester United’s impressive commercial revenue growth have yielded in a 30% increase in total revenue to £515m, making them the world’s highest revenue-generating club, although their result on the pitch have not been inspiring in recent years.

“The 2015-16 season saw Premier League clubs grow revenues by almost 10% … with the two Manchester clubs alone responsible for more than 50% of the increase,” said Dan Jones, head of the Sports Business Group at Deloitte.

BBC reports that their overall league revenue is set to be higher this season, largely due to a new television deal with Sky and BT.

“We continue to see television deals go up, and there is no reason to believe that will end any time soon,” added Mr Jones.

Furthermore, long-term revenue can be generated by a number of clubs – West Ham, Chelsea, Spurs, Liverpool, Everton and Manchester City – by expanding their existing stadiums or moving to bigger ones.

The only worrying factor has been the wage cost which is on the rise again, with gross transfer spending in 2015-16 at a record and salaries up by 12% to £2.3bn.