Liverpool travel to Dean Court to take on Championship table toppers Bournemouth in the quarter final of the Capital One Cup on Wednesday night. The Reds were beaten 3-0 by Manchester United at Old Trafford on Sunday and another loss tomorrow could pile huge pressure on manager Brendan Rodgers.

Liverpool last played Bournemouth last season, a game which ended with a 2-0 win for the Anfield side in the FA Cup. However, a lot has changed ever since and the Championship side would love to pile further misery on the Merseyside giants.

Eddie Howe’s team are in great form ahead of the clash and Rodgers would be ill advised to take Bournemouth lightly and a loss might mean that his job is on the line. Liverpool are expected to line up with a 4-2-3-1 system after their ineffective 3-5-2 setup against Manchester United.

Brad Jones is likely to retain his place in his side ahead of first choice Simon Mignolet while Javier Manquillo and Jose Enrique are expected to marshal either of the full back positions. Mamadou Sakho is expected to make a return after a long term injury beside Kolo Toure as Rodgers might rest Martin Skrtel and Dejan Lovren (sadly) ahead of Sunday’s clash against Arsenal.

Lucas Leiva and Emre Can should play as the double pivot in the 4-2-3-1 setup behind the triumvirate of Lazar Markovic, Adam Lallana and Phillipe Coutinho. Raheem Sterling would be expected to start on the bench and might come on if required. Up front Rickie Lambert could start ahead of the fit again Mario Balotelli.

Following in the Possible Liverpool line up vs Bournemouth: 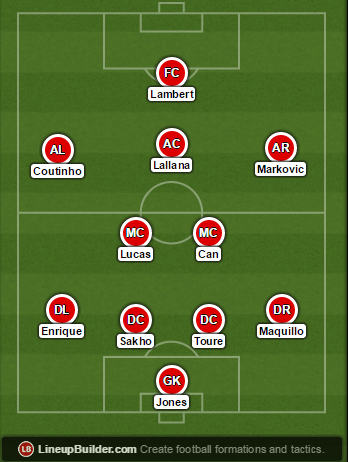 Predictions: It will be a tough match for the Reds against a high flying home side but Rodgers side should be able to grind out a 2-1 win.