Chelsea travel to Anfield in the early kickoff on Saturday to take on a Liverpool side extremely low on confidence. The Blues are unbeaten in all competitions so far, having escaped with a draw on Wednesday in the Champions League away at Maribor despite trailing for a short period in the second half. Liverpool, on the other hand, put in a dogged display to make sure that they came away with the Santiago Bernabeu with just a 1-0 defeat, rather than a thrashing.

Jose Mourinho will know that despite the Reds’ poor start to the season, the task at hand for his side is not an easy one. Anfield has been Chelsea’s least favourite hunting ground in the Premier League, and even though they have done relatively well over the past few years there, the Blues will have to be at the top of their game to come away with another victory.

Liverpool will have revenge on their minds, as it was this fixture last season that cost them the Premier League title. Chelsea came to Anfield to face a side on an 11-match winning streak, but a tactical masterclass from Mourinho saw his side record a memorable 2-0 victory. Steven Gerrard, the Liverpool skipper, was responsible for one of the Chelsea goals with a slip that allowed Demba Ba in. 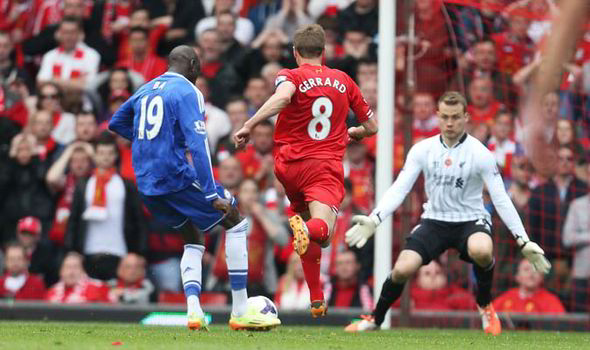 In terms of current form, Chelsea have the upper hand, big-time. They are the only unbeaten side in the Premier League, with 8 wins and 2 draws from their opening 10 games. Liverpool, on the other hand, are languishing in 7th, 12 points behind their opponents.

With regards to team news, Mourinho has a full squad to choose from. Ramires and Diego Costa returned from their respective injuries last week against QPR and are available for this one. Cesar Azpilicueta served the last of his three-match ban last Saturday and is expected to go straight into the starting XI and replace Filipe Luis.

It will be interesting to see how Chelsea shape up. In games against Manchester City and Everton, Mourinho opted to go with Ramires instead of Oscar in midfield in a 4-3-3 formation. The latter’s workrate though, in the last few games, has been absolutely immense and he is therefore expected to start ahead of his countryman. Chelsea’s line-up has had a similar look to it in the last few league games, and the 4-2-3-1 system is set to continue.

The league leaders have also received a big boost with the news that Liverpool’s star striker Daniel Sturridge will remain absent in this one.

Here is the possible Chelsea starting XI against Liverpool:

Chelsea’s unbeaten start to the season faces a stern test, as Liverpool look to avenge the defeat that cost them the title last season. But the Reds are facing a huge shortage of goals from their strikers and their undependable defence has kept just 2 clean sheets all season. This will be a intriguing and entertaining affair, but Chelsea have just too much firepower for Liverpool at the moment.