Chelsea manager Jose Mourinho has shed his frustration with the mounting injury problems his side is facing, ahead of the Blues’ away trip to Shrewsbury in the fourth round of the Capital One Cup tie tonight.

The Blues obviously are looking to make few changes from the side that faced Manchester United on Sunday, with Mourinho likely to give chances to several youngsters.

Mourinho hopes to get Diego Costa back for the Saturday’s Premier League clash with QPR, but the Spaniard has no chance of playing tonight.

The Spain forward has been troubled by niggling injury all season, and was taken to hospital with a stomach virus last week. Furthermore, he was already suffering from a groin injury, which he picked up on international duty.

Likewise, French Loic Remy is absent with groin injury as well, while it could be too much for the 36-year-old Drogba to play back-to-back matches. That means Andre Schurrle could operate as a striker in the false nine role. Mourinho said to the reporters ahead of the match:

“We are in a difficult situation with regards to today but, when you look at the players who didn’t play – Schürrle, Salah, Zouma, Aké, Mikel – these boys are obviously going to have to play.”

Petr Cech has been mostly used in the league games this season and he should feature tonight in place of Thibaut Courtois. Cesar Azpilicueta and Branislav Ivanovic have been suspended for this game which means Mourinho will have to reshuffle his defence. Here’s the possible Chelsea starting line up: 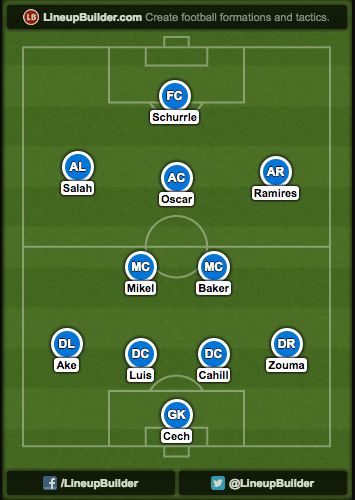 Prediction: Mourinho said that he will field a strong Chelsea team and that the Blues will not consider the game as a friendly, so, 0-2 to the visitors.