League-leaders Chelsea crossed their first hurdle of the festive period by putting away an in-form West Ham United team comfortably on Boxing Day. Now, going into the New Year, they have two tough away games to deal. The first of those is on Sunday, at Southampton.

The Saints have been a surprise package this season and are currently in 4th position in the table. Despite losing most of their star players from last season in the summer, new manager Ronald Koeman has managed to not only steady the ship, but see it race ahead of several top clubs like Arsenal and Liverpool. They come into this game against Chelsea on the back of two consecutive wins.

Jose Mourinho’s men were simply outstanding against West Ham, with many people saying that the football played was some of the best they have seen from the Blues this season. Goals from John Terry and Diego Costa saw them record their third consecutive 2-0 win in the league, and going into the Gameweek 19, the last of the first-round of fixtures, they have only dropped 9 points.

There are no fresh injury concerns for the Blues to deal with in this one, but it will be interesting to see if Mourinho chooses to go with exactly the same line-up that dismantled West Ham. There is a lot of football to be played in the coming days, with a trip to White Hart Lane looming on New Year’s Day. It is expected though, that the same XI will feature at St. Mary’s on Sunday.

Here is the possible Chelsea starting line-up vs Southampton: 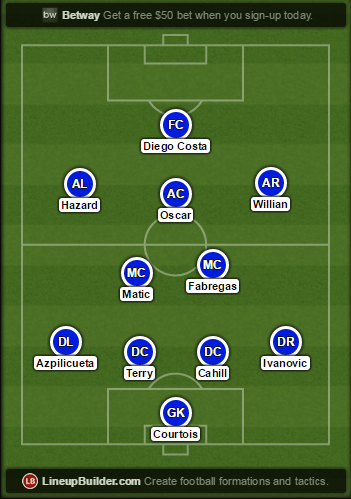 Chelsea’s run of three consecutive clean sheets is under threat here, but with the way they are playing at the moment, it is very difficult to see Southampton getting a result, even though they are at moment. The Saints are a team that likes to play open and expansive football, and this will leave more space for the likes of Cesc Fabregas and Eden Hazard to exploit.