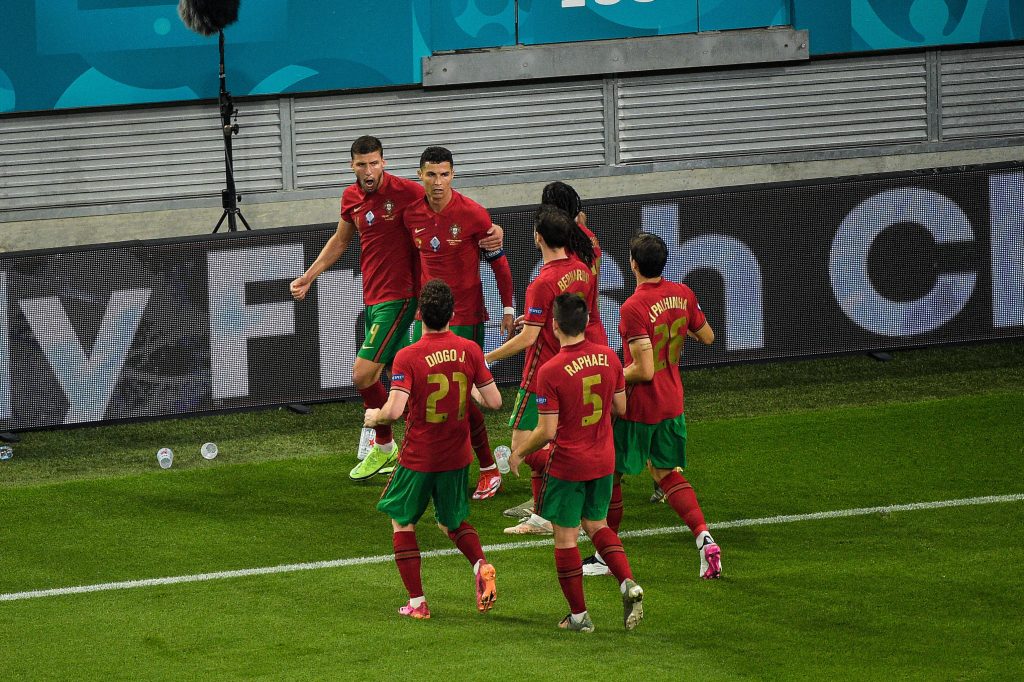 Portugal and France both progressed to the knockout stage of Euro 2020 after an entertaining 2-2 draw on Wednesday.

The first chance of the evening fell to Kylian Mbappe. The youngster was played through on goal by an excellent Paul Pogba through ball, but his finish was underwhelming for a player of his standard.

From then on, it was a half soaked in controversy, beginning when Portugal were awarded a penalty in the 28th minute.

Danilo Pereira got his head to a cross and was caught by the arm of Hugo Lloris on the follow-through.

Referee Antonio Mateu Lahoz pointed to the spot, despite protests from French players. Cristiano Ronaldo stepped up and slammed his penalty past Lloris.

Just before half time, more controversy arose when France were given a penalty. Mbappe went down under contact from Nelson Semedo, but replays showed the decision to be soft at best.

VAR checked the incident, but the original decision stuck. Karim Benzema was on hand to convert his spot-kick.

And Benzema doubled his personal tally after the break. He latched onto an inch-perfect through ball from Pogba and finished in off the far post. The linesman initially flagged for offside, but VAR intervened and gave the goal.

But this lead only lasted 12 minutes as Portugal were awarded another penalty. Ronaldo’s cross was handled by Jules Kounde, and the five-time Ballon d’Or winner rolled his penalty into the bottom left corner. It was his 109th goal on the international stage, equalling the record set by Ali Daei.

France came close to retaking the lead in the 68th minute. Pogba hit a shot from range on target, but Rui Patricio was at full stretch to turn it onto the crossbar and then got up quickly to deny Antoine Griezmann on the rebound.

There weren’t many chances from then on, but there was still time for a bit more controversy in injury time.

Kingsley Coman took on Bruno Fernandes and went down, but a fourth penalty was not awarded. There was clear contact, but it may have been just outside the box.

The game finished 2-2, ensuring both sides progressed. France ended the group stages in first spot, meaning they face Switzerland in the round of 16. Portugal finished in third and will play Belgium.

Rui Patricio (7/10) – Couldn’t do much about the goals. Made a terrific double save in the second half.

Nelson Semedo (7/10) – Unlucky for the penalty. Coped well with the pace of Mbappe. Subbed off with an injury.

Pepe (7/10) – Helped keep the likes of Mbappe and Griezmann quiet with a solid performance at the back.

Ruben Dias (5/10) – Struggled against Benzema, who got the wrong side of him for the second goal.

Raphael Guerreiro (6/10) – Added nowhere near as much as he could going forward. Was fine defensively.

Joao Moutinho (6/10) – Put in a good cross in the lead up to the first penalty. Struggled to deal with Pogba in the middle.

Danilo Pereira (6/10) – A brave header to win the first penalty. Some nice touches. Subbed off at half time.

Renato Sanches (7/10) – A promising performance from the former Bayern Munich man. Could have earned himself a regular place in the starting XI.

Bernardo Silva (6/10) – Had a good first half but did little in the second.

Cristiano Ronaldo (7/10) – Took both of his penalties confidently and never looked like missing. Made history with his 109th international goal.

Hugo Lloris (5/10) – Reckless punch for the first penalty. Not one of his finest evenings.

Jules Kounde (5/10) – Clearly not a natural right-back. Offered nothing going forward, and conceded a penalty.

Presnel Kimpembe (7/10) – Much like Varane, didn’t do much wrong for either goal. A reliable 90 minutes from the PSG man.

Lucas Hernandez (5/10) – Sometimes struggled against Bernardo Silva and picked up a yellow card. Substituted at half time.

N’Golo Kante (6/10) – Won the ball back a fair few times and protected the defence well. Didn’t do a whole lot on the ball.

Paul Pogba (9/10) *MOTM* – Noticeably a cut above the rest. Confident on the ball, creative, played the two best passes of the evening and was unlucky with a superb strike that was saved.

Corentin Tolisso (5/10) – Did his part in the defence but offered next to nothing going forward.

Karim Benzema (8/10) – Stuck his penalty away well. Good run and finish for his second.

Antoine Griezmann (7/10) – Looked bright on the ball, always looking to make something happen, and contributed defensively.

Lucas Digne (NA/10) – Substituted six minutes after coming on due to injury.