Manchester United suffered yet another defeat in the Premier League yesterday, when they lost 2-0 against Everton.

While the season has been a complete mess, Manchester United board are willing to keep their patience with manager David Moyes. The Scot will be handed a hefty transfer kitty in the summer and a massive rebuilding process is expected to take place. 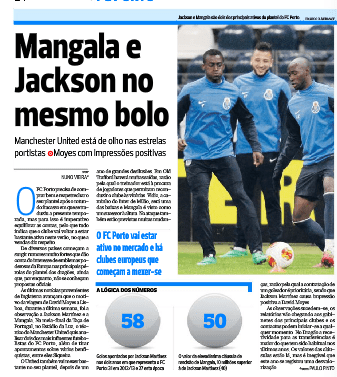 Last week, Moyes made a personal scouting trip to Portugal to watch Benfica in action against Porto. The Red Devils have been linked with several players plying trade in the Portuguese league, so naturally, his visit has sparked wild speculations in the Portuguese press.

Couple of days back, O Jogo reported that Manchester United could be interested in striker Jackson Martinez, who has scored 58 goals in 89 games for Porto.

Also, last week, O Jogo speculated that Manchester United boss might have been targeting Eliaquim Mangala, who was a reported target of Manchester City, on the transfer deadline day in January.

Now, A Bola reports that Porto might be willing to sell both the players to Manchester United in a package deal. Mangala has a release clause of €50m, while Martinez could cost around €40m.

Well, I personally don’t see any reason why Manchester United should go for Martinez. They need a central defender and could try their luck for Mangala, fair enough, but why would they need a striker when other areas of the pitch needs primary attention.