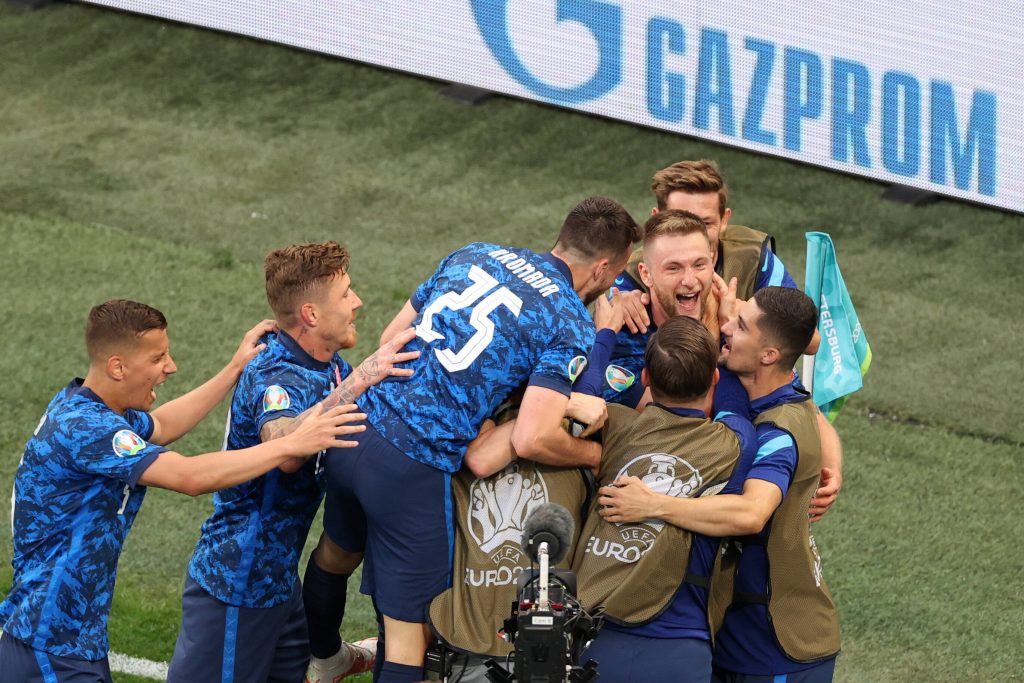 Poland’s hopes of reaching the knockout stages took a huge blow after they were defeated by Slovakia in their opening group game.

Slovakia made a bright start to the game and took the lead in the 18th minute. Robert Mak produced some excellent footwork to beat Bartosz Berezynski down the left, and his deflected shot crashed off the post and in off the back of goalkeeper Wojciech Szczesny.

This wasn’t the only chance that Stefan Tarkovic’s men created. Ondrej Duda hit one against the side netting, while Juraj Kucka struck just over from range.

As for Poland, their attacking threat was effectively nullified in the first half. They found themselves limited to shots from long distance, with Grzegorz Krychowiak and Piotr Zielinski both missing the target from outside the box.

Whatever Paulo Sousa said to them at half time clearly had an impact as they were level within 30 seconds of the whistle.

Maciej Rybus and Mateusz Klich combined down the left, and the former’s cross was scuffed into the far corner by Karol Linetty.

Five minutes later, Linetty had an opportunity to get another. Klich was involved again, attacking down the right and cutting back for the goalscorer, but his shot was straight at Martin Dubravka.

Poland continued to pile on the pressure, with defender Kamil Glik heading over when well placed from Zielinski’s cross. However, all that momentum was halted in the 62nd minute when they went down to ten men.

Grzegorz Krychowiak received a second yellow card after a foul in the middle of the park, becoming the first player to be sent off at the tournament.

Slovakia managed to provide more threat, and it paid off in the 68th minute. Marek Hamsik’s corner dropped to the feet of Milan Skriniar, and the centre-back fired into the corner. It was a finish that club teammate Romelu Lukaku would have been proud of.

Poland pushed in search of an equaliser but struggled to break down a stubborn Slovakian backline.

Robert Lewandowski, who was unusually quiet, failed to get enough contact with a header from a corner, while substitute Tymoteusz Puchacz struck over the bar with a shot from outside the box.

They would create one last chance to snatch a point, but it fell to the wrong man. Centre-back Jan Bednarek found himself in a good position in injury time but dragged his left-footed shot wide.

The defeat leaves Poland in real danger of elimination. They now go into fixtures against Spain and Sweden needing at least three points.

As for Slovakia, the win will go a long way to getting them to the knockout stage.

Wojciech Szczesny (5/10) – Very rarely tested. Should have done better with the opening goal.

Kamil Glik (7/10) – Best player in Poland’s ranks. Battled hard all evening, although he should have done better with a header early in the second half.

Jan Bednarek (6/10) – Can’t be blamed for either goal. Missed a late chance to equalise.

Karol Linetty (7/10) – Always involved and got in the right position to score, although the finish was somewhat fortunate.

Grzegorz Krychowiak (4/10) – Looked good on the ball but picked up a second yellow card with a careless and unnecessary challenge.

Mateusz Klich (7/10) – Good link-up play for the goal. Looked like Poland’s biggest threat for the most part.

Kamil Jozwiak (5/10) – Created very little. Far more will be expected from the winger.

Robert Lewandowski (5/10) – Didn’t have many chances. Kept well quiet by the Slovakia backline.

Martin Dubravka (6/10) – Didn’t have a whole lot to do. Handling was good all evening. May be disappointed to have let the goal in.

Peter Pekarik (6/10) – Linetty’s goal came from down his side but otherwise reasonably strong.

Milan Skriniar (8/10) *MOTM* – Came up against one of the world’s best players and passed that test with flying colours. Produced a cracking finish to win it.

Juraj Kucka (7/10) – Good on the ball and a calm head in midfield. Some good work to win the corner for the second goal. Made several tackles to help Slovakia defend their lead towards the end.

Lukas Haraslin (6/10) – Always worked hard but was rather quiet throughout the game. Won the corner which led to Skriniar’s goal.

Marek Hamsik (7/10) – Played with the talent that we all know he has. Not always completely effective, but a good display.

Robert Mak (7/10) – Incredible piece of skill in the build-up to the opening goal. Often a threat.