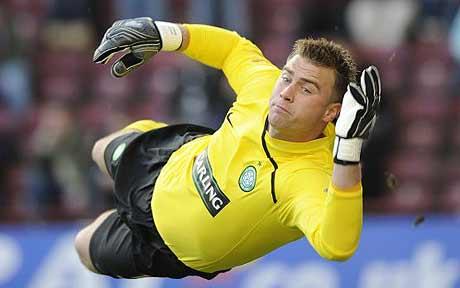 Rangers booked their place in the Europa League group stages following a last-gasp 1-0 victory against Legia Warsaw at Ibrox on Thursday night.

Alfredo Morelos’ 90th-minute winner made all the difference and proved crucial after the Light Blues were held to a goalless draw in last week’s first-leg in Poland.

Celtic legend Artur Boruc would have been disappointed to see his boyhood club crash out of the competition at such a stage and against his former rivals.

The Bournemouth goalkeeper was at Ibrox to support Warsaw, and he was pictured leading the chants at the away end against Rangers.

The 39-year-old spent five memorable seasons at Parkhead, helping them to three Scottish Premiership titles, two Scottish League Cups and a Scottish Cup before leaving in 2010.

Boruc never missed an opportunity to goad Rangers fans anytime the Old Firm derby took place, and he continually courted controversy by crossing himself in a bid to provoke Light Blues faithful.

Artur Boruc back at Ibrox. pic.twitter.com/iYIbyLgp7F

The Hoops hero was hoping to get one over his former rivals last night, but Steven Gerrard’s side had the last laugh and could make things sweeter by coming out tops when Neil Lennon’s men come visiting on Sunday.

Rangers have won the last three of their encounters with Celtic, and getting a victory could go a long way in boosting their chances of preventing the Bhoys from making it nine league titles in a row this season.