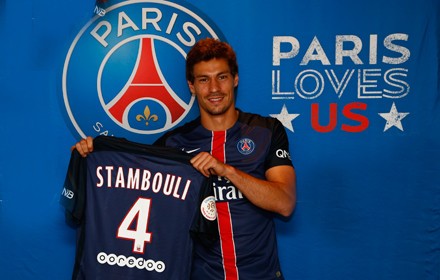 Tottenham Hotspur have confirmed they have reached an agreement with Paris Saint-Germain for the sale of their midfielder Benjamin Stambouli.

He joined the north London club from Montpellier and went on to make 25 appearances for the White Hart Lane club. However, the 24-year-old’s services are no longer required for the Mauricio Pochettino, who has sanctioned his sale.

Tottenham confirmed the deal on their official website. A statement read, ” We have reached agreement with Paris Saint-Germain for the transfer of Benjamin Stambouli.”

Meanwhile, PSG have confirmed the midfielder has completed his switch to Paris and signed a five-year deal, which will keep him at the Parc des Princes until 2020. Stambouli has expressed his delight after joining the Ligue 1 champions on Tuesday.

“I am delighted and very proud to become a member of the Paris Saint-Germain family,” he told PSG’s official website.

I wasn’t necessarily planning to leave the Premier League after one year but when a club with the stature of Paris Saint-Germain calls you, it makes your choice a lot easier! That’s the moment when you really experience the power of this club.

“I will now focus on my preseason. It will be important to take advantage of the friendly games that we still have to play in the US to find my marks on the pitch.”

PSG are currently in the United States for the pre-season tournament, International Champions Cup. They will face Premier League giants Manchester United, who have won the opening two matches so far against Club America and San Jose Earthquakes.