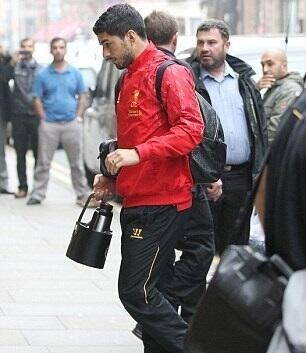 Liverpool will travel to Old Trafford to face arch-rivals Manchester United in the Capital One Cup tie, where Luis Suarez will play for the first time in the season.

The Uruguayan will return to the Reds starting line-up after completing his 10-match suspensions and he has arrived in Manchester, as we can see in this picture.

Brendan Rodgers’ side has made a solid start to the season, but are heading into this match on the back of a 1-0 defeat at the hands of Southampton.

Manchester United on the other hand have had a stuttering start to their campaign and suffered a 4-1 defeat at the hands of derby rivals Manchester City on Sunday.

Can Luis Suarez make a big impact for the Reds tonight?