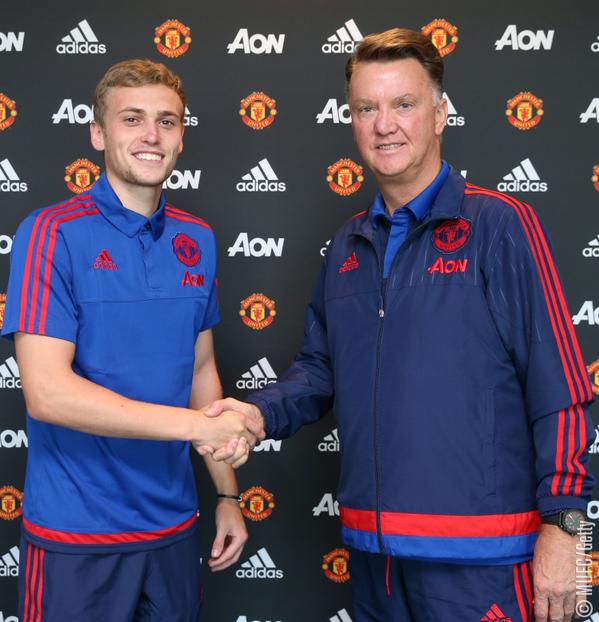 Manchester United striker, James Wilson has signed a new contract at the club.

James Wilson has signed a new contract at #mufc until June 2019 with an option to extend for a further year. pic.twitter.com/SRkTX2tQBW

The England youngster has been linked with moves away from Manchester United all summer. Despite the lack of strikers initially, Wilson struggled to get a game.

Although he was linked with loan moves to other Premier League clubs, it appeared that James Wilson would consider a permanent move in order to get regular football as well. The United academy graduate has been a bright spark when given a chance at Old Trafford.

Manchester United manager, Louis Van Gaal claimed that Wilson is one of England’s brightest prospects and is destined to be a star.

Louis van Gaal said: “James is one of the brightest young English prospects and we are delighted he has signed a new contract. He is a very talented forward player and has a keen eye for goal. His development is continuing in the right direction and it is clear to see that he has a fine future ahead of him.”

Furthermore, the England youngster also expressed his delight at extending his contract with Manchester United.

James Wilson said: “I have been at United since I was seven years old and have thoroughly enjoyed my time here so far. Growing up at the club has been an incredible experience and I feel it stands me in good stead for continuing my development as a Manchester United player. I am delighted to have signed a new contract and look forward to playing a part in the team for many years to come.”

Wilson, who seems to be a popular figure amongst the fans, will now stay at Old Trafford till 2019 and has the option of extending another year.

The most important thing for the young striker now is to get games and both the club and the player should now seriously consider a loan move this season.

Considering the form of Anthony Martial, Wilson will find it hard to break into the United first team anytime soon. A loan move would benefit all parties involved.