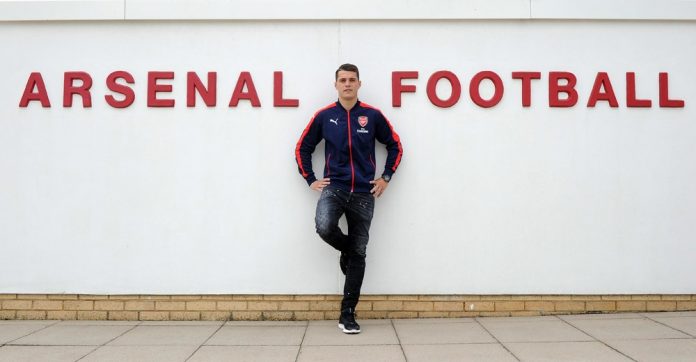 Arsenal have confirmed the signing of the Borussia Monchengladbach midfielder Granit Xhaka today.

The North London giants took to Twitter to unveil their big money midfield signing. The Switzerland international was pictured posing in the new Arsenal home kit for the 2016/17 season.

Xhaka expressed his delight after completing the move. The player claimed that he cannot wait to compete in the Premier League for a special club like Arsenal.

Arsene Wenger also revealed that the club have been tracking the Gladbach star for a while now and are very excited to have secured his services.

“We have been watching him for a long time now and he is a player who will add quality to our squad. We wish Granit a good Euro 2016 with Switzerland and look forward to welcoming him to Arsenal ahead of next season.”

Xhaka will bring much-needed quality and defensive cover to the Arsenal midfield next season.

The Swiss star has been one of the best players in the Bundesliga since 2013 and despite his steep price, he has the ability to be an outstanding addition for Arsenal. Xhaka was linked with a move to Liverpool this summer, but Arsenal have moved swiftly to secure his services.

Arsenal will now look to press ahead with their move for a striker. Wenger’s side are in desperate need of a number nine and have been linked with the likes of Morata and Higuain.